Best Beans for Espresso in 2023

Before we go any further, there is one thing you absolutely must know: there is no such thing as an espresso bean.

This isn’t a lie. You can corroborate this with a simple Google search!

Espresso isn’t a roasting method, either. You can’t pick an espresso bean off of a plant, nor can you roast it in a specific way to make it an espresso bean. Espresso is created based on the brewing process, aka, what you do to it.

All of that being said, that doesn’t mean that there aren’t types of beans and roasts that aren’t primed and ready to produce a shot of espresso that’ll your make Monday morning tolerable.

We're here to help you make the right choice, so let's get started with our reviews of the best coffee beans for espresso in 2023.

Okay, So, What Exactly Is Espresso, Then?

Espresso shots are at the core of mixed coffee drinks as well as in your demitasse. By definition, it’s simply strong black coffee made by forcing nearly-boiling water through it.

Despite the popular misconception, a 2 oz. shot of espresso does not have more caffeine that the typical cup of coffee — it clocks in at 80 milligrams versus the 120 in a standard cuppa. You don’t go to espresso for more caffeine — you go for the full-bodied flavor or the exquisite way it mixes with milk and other delicious substances.

I’m a firm believer that knowing the history of whatever you’re doing improves whatever that thing may be. In this case, your espresso making will be imbued with the passion of all of the espresso makers and baristas that came before you!

Anyway. Credit where credit’s due is probably more the point. Whichever you’d like to go with.

Like most good things, the espresso machine was developed because humans are impatient little buggers. People hated waiting so long for their morning brew (five minutes), and Angelo Moriondo turned to a woman named Martina with a bunch of ideas, which she then used to make the first espresso machine.

In 1884, in Turin, Italy, Moriondo was granted the patent for the first “new steam machinery for the economic and instantaneous confection of coffee beverage.”

It was capable of 1.5 bars of pressure and was the first macchina to use both water and steam. While Moriondo never did anything of import with this machine, he left it wide open for Luigi Bezzerra and Desiderio Pavoni to advance and market to the masses.

Like 100 years later and here we are. I think you get the picture.

That’s a mighty fine question, brewer. You have a lot of options. The thing is, no two coffees are really going to taste alike because of the numerous combinations of soil they can be grown in, the altitude they’re grown at, the way they’re roasted, packaged, shipped, and about 100 other factors.

Not to mention that your own personal equipment plays a role in how your homemade espresso shot turns out. I’ll try to make this as easy as possible for you by giving you a good place to start, though, so never fear!

The first thing you should know is that if you already have a favorite coffee bean, you should use that to make espresso. If you just paused and said, “but it’s not an espresso bean-,” I really hope you caught yourself. Rove your little ol’ eyes up and reread that first section real quick before continuing on.

The fact of the matter is, if you already like it as a mug of morning joe, you’re probably going to really like it as an espresso shot.

Traditionally, people have chosen darker roasts because the caramelly notes are more prominent, but there’s been a swerving towards medium roasts to highlight newer flavor profiles. Basically, what we should learn from this is that just because dark roasts are how it’s always been done, doesn’t mean that’s how we should continue to do it.

How Do I Know I’ve Done It Right?

Before you tip that cup between your lips, though, a great way to eyeball a good espresso shot is the crema. It’s reddish-brown and created when air bubbles mingle with the non-soluble oil on the beans. It’s the frosting on the cupcake, the sugar on the cookie, the guacamole on the chips, and it’s a good indicator of whether you’ve pulled your shot right.

If you want an in-depth step-by-step through the process, check out the guide we've made you right over here.

We’ve done a decent amount of talking but we haven’t even chatted about beans yet. Let’s get crackin’ on this list, and we’ll learn as we go. We’ll start with some light roast coffee bean options and work our way on up to the darker roasts.

Best Beans for Espresso in 2023 - Reviewed 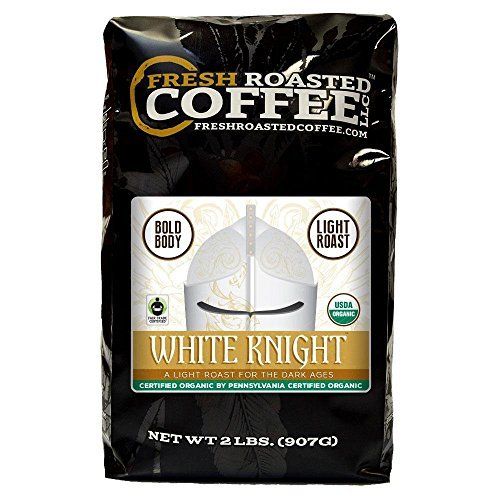 I always fancy coffees with a story, especially ones that speak of adventure. This White Knight Light Roast is fair-trade organic coffee, and Fresh Roasted Coffee LLC puts a lot of emphasis on how they package their product, which is great! It’s a huge component in the freshness.

This beautiful bag is 100% Arabica, which is ideal for a shot of espresso. It has notes of bing cherry and cocoa. Plus, it’s a blend of single-origin coffees with a bold flavor.

Freshly Roasted Coffee LLC may have a pretty plain-jane sort of name, but their ways certainly aren’t typical. Headquartered in Pennsylvania, this company’s entire process is worker-, environmentally-, bird-, and rainforest-friendly. 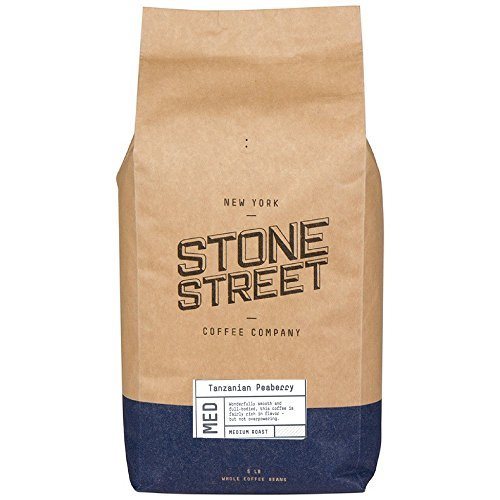 Volcanic coffee is tops. My favorite coffee is always grown on the slope of a volcano, whether it’s Hawaii or Kilimanjaro. There’s just something about the ash in the soil and the danger of an impending volcanic eruption that really adds some rev to the morning mug, ya know?

Peaberry is a type of coffee bean, and they’re rare, as well as oval. They can be told apart from their brethren thanks to a cleft in the center. Described as clean and crisp, this gourmet African coffee is a good foray into the volcanic coffee realm!

Stone Street Coffee Company is located in Brooklyn, so you know there’s some hardened sass to each bag of these beans, too. 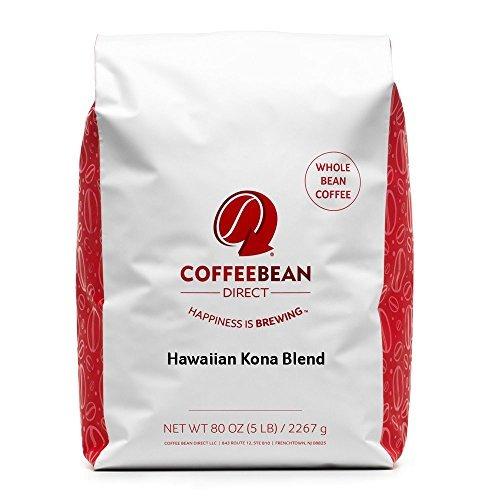 Kona coffee is typically exorbitantly priced, but it’s known for its incredible flavor. Coffee Bean Direct offers you the dynamic Kona flavor with its blend of arabicas that taste a little bit like butter, a little bit like macadamia nut, and a tad like coriander.

Bright, artisan, and with mild acidity, its oily beans lend to a nice crema. Top it off with the fact that it’s made in small batches and roasted in the USA, and it has a good chance at being the new household favorite.

To be honest, I tried to figure out Coffee Bean Direct’s roasting process and certifications, but they’re not super open about it. They work out of Frenchtown, New Joi-Zee. That’s about all I’ve got for ya. 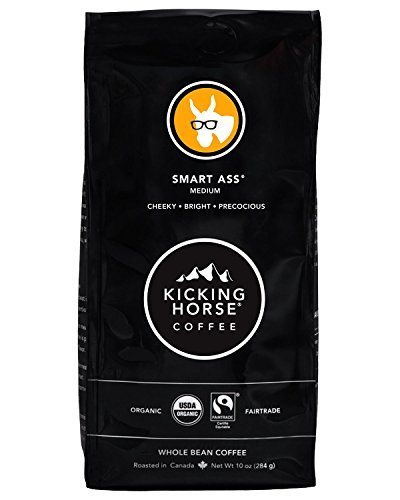 I haven’t managed to create a coffee list without including Kicking Horse on it. I’ve kind of made bets with myself to see if I can do it, but Kicking Horse Coffee is just damn good at what they do.

Their Kick Ass blend of beans from Africa, Central, and South America are the Three Musketeers. They’re Harry, Ron, and Hermione. The Kingston Trio. Whichever dynamic set tickles your fancy — that’s what these beans are.

The company describes this blend as “cheeky,” which I think pretty much covers it. 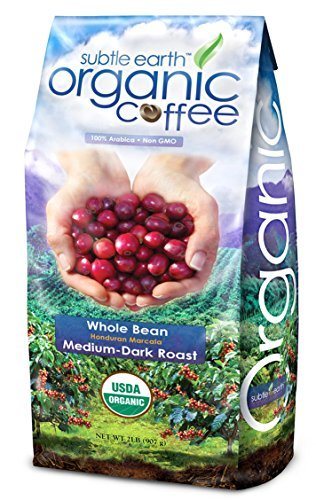 Cafe Don Pablo is another brand that’s widely applauded — rich and chocolatey, these beans are low on acid just like the company is low on environmental impact.

Just like I’m telling you to use your senses to determine whether you’ve pulled a perfect shot, Cafe Don Pablo does the same to make sure their Honduran beans are roasted to perfection. They package for pristine freshness, which is exactly how you want it to arrive on your doorstep. 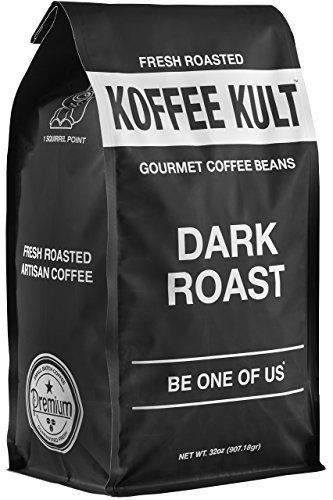 It’s called a kult for a reason. Blazoned on the front, this bag says ONE OF US, and you’ll probably have a hard time not succumbing to the tantalizing smooth, cinnamony, and bold flavor of this 100% Arabica beans.

Sourced from Guatemala, Colombia, and Sumatra, they tout their coffee as making “a mean espresso shot,” so, I say take them up on that and fill your demitasse. Not that there’s anything to fear; there haven’t been any weird reports of ritualistic blood drinking or chanting from these coffee drinkers. 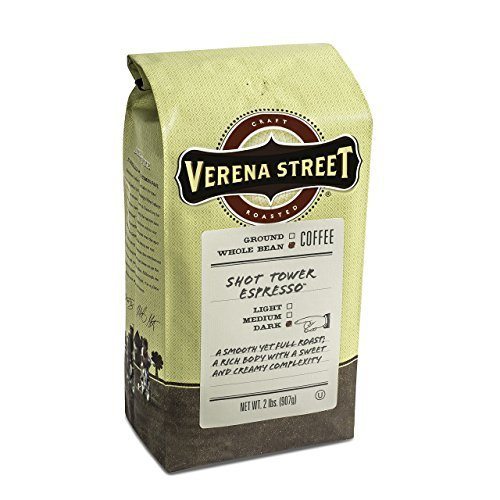 Before you start parroting back what I said about espresso beans not being real, yada yada, just calm your horses. Pat ‘em on the nose and you apologize for riling them up, you hear me?

What we can take from makers labeling their beans as “espresso” is that it’s their recommendation, so it likely has what we’re jonesing for. Shot Tower Espresso has all of the right attributes to create heaven in a morning mug — it’s sweet and creamy, and it produces that coveted velvety crema we’re craving. Mmmmm.

You have all of these listed, and hundreds more, to choose from. In all honesty, though, if you have a favorite bag of fresh coffee at home, give those beans a go first. You might be surprised how flexible most beans are; as long as they’re 100% arabica and of quality, they can easily go from an 8 oz. cup of a joe, to a shot of the good stuff, to a cold-brewed wonder.

If you want my pick, I’d opt for the Fresh Roasted Coffee LLC, White Knight or the Koffee Kult. Two ends of the spectrum for whatever I’m feeling like in the morning. I can dig it.

Which bag are you going to try?