If you have limited counter space but still want a machine that can whip up the good stuff, a 4-cup coffee maker might be just what you’re looking for. If you’re the only coffee drinker in the house and just don’t see the need for having a full 12-cup machine, a 4-cup coffee maker could be the optimal solution.

If you realize that coffee is best consumed within 10-15 minutes of brewing and you don’t want the temptation of drinking the cold remnants of a half pot hours stale purely because it’s there, a 4-cup coffee maker will 100% accomplish that task.

Whatever your reasoning, 4-cup coffee makers have their perks. They don’t often come with the same selection of features as larger 12-cup models, but how many of those functions, buttons, etc, do we all end up using anyway?

All of the models below are compact, roughly 11-inches tall or less, but make sure you know the dimensions from countertop to cabinet if your primary concern in space. With that disclaimer out of the way, let’s get this list started! 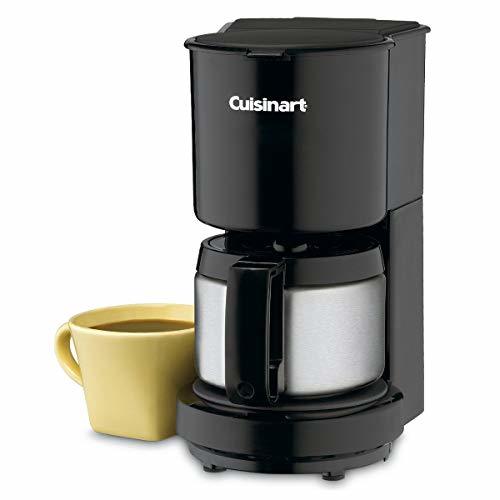 At only 5.2 inches wide, the Cuisinart 4-cup coffeemaker is ideal for a kitchen with a less-than-ideal amount of counter space. Clocking in at 10-inches tall, it can also easily be stashed inside a standard cabinet space if it simply doesn’t fit with your vision.

Boasting a stainless steel carafe and a minimalist black machine body, this 4-cup coffee maker may look no-nonsense, but it has a handful of great perks. The brew-pause function allows you to sneak a cup while it’s still making the rest of the pot and, when you do grab it, you won’t have to even worry about burning your hand on the hot stainless steel because it comes with a built-in knuckle guard. It also shuts off automatically after 30 minutes, which is crucial if your mornings are anything like mine, i.e. chaotic. 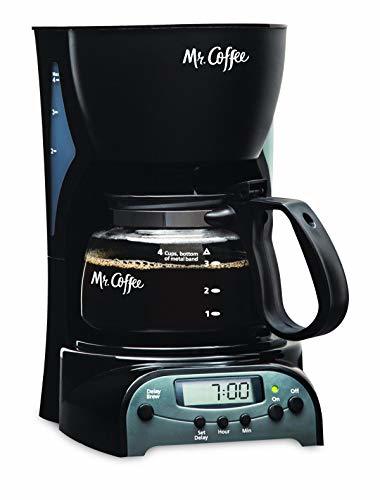 If you want more but in a smaller package, the Mr. Coffee 4-cup programmable coffee maker won’t take up much space but offers many of the same functions as a larger machine. The filter is removable for easy cleaning and has a compatible reusable filter if you want to ditch the paper products. It can be set to turn on, heat up, and brew before your alarm’s even thought about disturbing your slumber, which is one of the biggest features on this little fella.

It has an automatic shut-off at one hour, which gives you a little more time to consumer all four cups while still warm, as well as a Grab-A-Cup feature for when you just can’t wait to enjoy the good stuff. 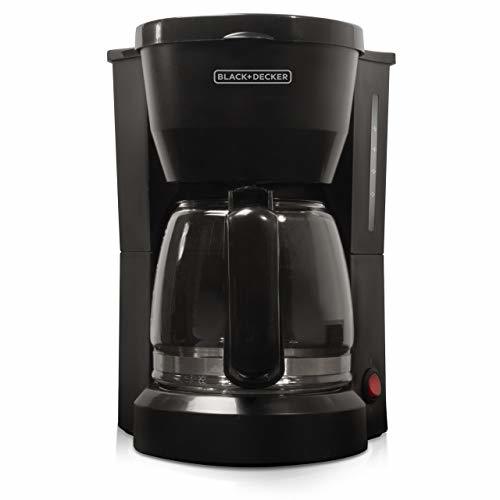 BLACK+DECKER is a classic name in kitchen machines, and this 5-cup coffeemaker is no exception. It has the classic look and simple, no-nonsense features. An on/off switch and a keep-warm hot plate are the primary features of this model, making it great for people who just want to make their coffee in the morning without any sort of fussy programming. The water container has a viewing pane so you can always see the water level and the filter basket is removable for easy cleaning.

This model was made for the space-conscious, down to a storage space for the cord. It clocks in at only 7.3 inches in width and just a hair over 10 inches in height, so it won’t take up much room on your countertop (even though this bad boy gives you FIVE cups instead of four). 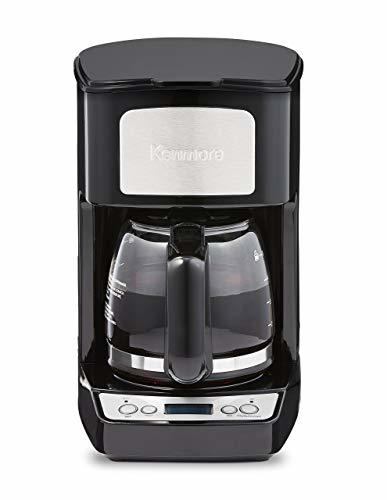 Another 5-cup model, this Kenmore ups the ante in two distinct ways: it comes with a metal filter (no paper products, yay!) and has a 2-hour auto shut off. The latter feature is great for really slowly enjoying the entire pot by yourself, which I can appreciate.

Like most 4- and 5-cup models, it has a Pause and Serve feature to snag a cup before it’s fully done brewing and has 24-hour programmable controls so you can set it before bed and wake up to the smell of fresh java. This model does have a little more girth than some of the others on the list, clocking in at 12 inches across and 15 inches in height. 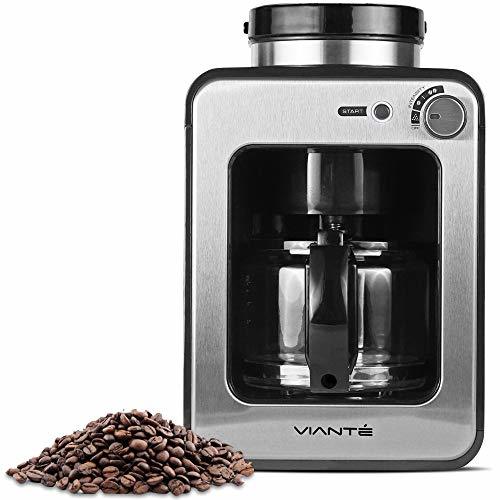 This Viante Grind and Brew coffee maker is the most expensive on the list, but it also has the most working parts to it. It can brew both ground or whole bean coffee, and neither need input from you. If you dump in whole beans, select the grind mode and it’ll take care of everything. You can even adjust the coarseness of how it grinds to find the perfect intensity.

The machine also features a keep warm plate, a glass carafe, and a permanent washable filter, so no paper products required. Despite all of the features, in particular the built-in grinder, this coffee maker doesn’t take up any more space than any of the other entries on this list. It’s less than 11 inches in height and 6.5 inches in width, making it compact enough for even the most limited counter spaces. 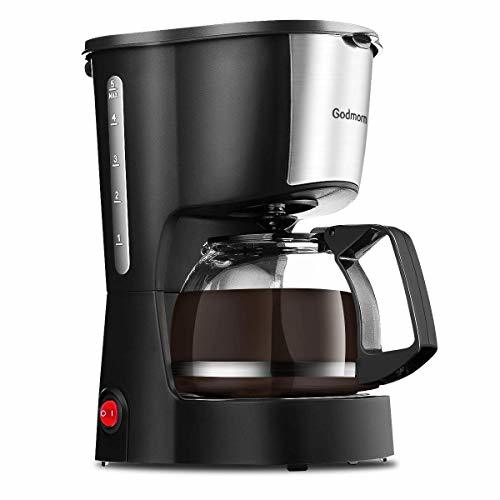 Modeled after the idea of drip coffee, the Godmorn Filter Coffee Machine is designed to the tune of no-fuss no-butts no-coconuts. Featuring exactly one button that turns it off and on, the machine is set to brew and that’s about it. It automatically shuts off the heating pad after 40 minutes so you don’t have to worry about it partway through the mid-morning meeting.

It doesn’t need any paper products thanks to the built-in reusable filter and it’ll help keep your counters clean with its anti-drip valves. Plus, despite offering 5 full cups, it’s one of the smaller machines on this list. Clocking in at 7.2 inches in width and 9.8 inches in height, it’ll fit just about anywhere your heart desires. 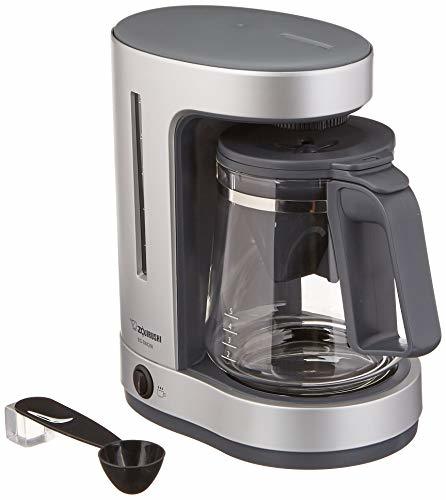 This bad boy’s the unique addition to this list, and, no, not because it brews five cups instead of four. The Zojirushi is also set up as a drip machine rather than a brewer, with the filter descends into the pot rather than being mounted to the actual machine, but it ups the ante over the Godmorn. The water is heated up and then visibly drips down through the grounds, a process closer to what happens with a Chemex.

This 5-cup machine will put more of a dent in your wallet than others, but drip coffee is notoriously better than the brewed stuff. While this isn’t quite the controlled process many hipsters take so much pleasure in, it’s as good as the automated version of the drip process can get. It has several unique perks, too, such as a removable water reservoir and a charcoal water filter with a 2-year lifespan. It comes with a replacement one, too.

While it has a larger coffee capacity, it won’t take up any more space on your counter than a 4-cup option. Clocking in at just under nine inches in width and under 11 in height, the Zojirushi packs a compact punch.

The best cost-to-function machine, in my personal opinion, is the Kenmore 80509 5-Cup Digital Coffee Maker in Black. The 24-hour programmable function and the reusable filter make it one of the most decked out classic models available.

On the opposite end of that argument, though, I have an affinity for anything that can make my coffee taste even more delightful with less effort from me, making the Zojirushi EC-DAC50 Zutto 5-Cup Drip Coffeemaker stand out in my eyes. There’s just something about a good cup of drip coffee that I can’t pass up. I definitely recommend dropping the dinero for this beaut.

If you’re looking for more features than you’re seeing here, you’re only going to find most of those equipped on larger models, which you can take a look at here.