Budgets aren’t fun. They’re one of those things that universally sucks.

But, if you play your cards right, you can work with just about any dollar amount you can spare towards the true, unfailing love of your life — espresso. What compares to a steaming shot of the bold stuff served in a stylish demitasse?

This is a serious plight, and I’m here to lay out your options, based on your budget, and help you get the most bang for your buck.

What Espresso Is — And Isn’t

Despite what’s often marketed, espresso isn’t a type of roast. There’s not a specific bean or blend that “is” espresso.

Espresso is a preparation method, and it’s far more rooted in chemistry than the automatic machines of today let on.

In layman’s terms, for those us who haven’t read anything more prolific about science than a Bill Nye meme since high school, it’s when highly-pressurized, very hot water is forced through tightly packed coffee grounds. Hot water plus pressure plus grounds equals a shot of espresso. It’s 30ml of pure joy. One ounce of get-up-and-go.

Angelo Moriondo is the Italian (of course) man who patented the first espresso machine way back in 1884.

Moriondo claim ownership, but a woman named Martina actually built his prototypes, an interesting tidbit there.

Neither of them likely would’ve imagined how popular the espresso machine would become a hundred years hence. In fact, Moriondo jealously guarded the first machines, tinkering with them until he died, but never mass producing them.

After Moriondo, Bezzera stepped in and improved on his designs by adding multiple brewheads, the portafilter, and finding a way to reach the ideal espresso temperature — 195 degrees F.

At Bezzera’s bequest comes Desiderio Pavoni, a man who knew what to do with the improvements that Bezzera had made.

He added the first pressure valve, which is actually largely where the term “pulling a shot” comes from — the motion of pulling the level to express the water through the coffee.

READ: How to Make Espresso at Home

Does that just get you all worked up for a good shot of espresso or what? Then let’s talk about what exactly we’re looking for in all of these machines: consistent pressure, perfect temperature, and indulgent crema topping each velvety ounce. 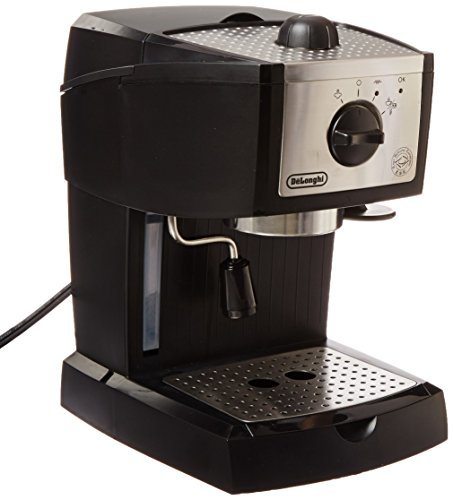 You don’t need to drop mucho dolares to get a top-notch espresso machine, and the DeLonghi EC155 really goes to great lengths to prove that.

The 3-in-1 filter holder is notable for its ability to hold enough fine grounds for one or two espresso shots, or you can opt to use a pre-made pod.

The large, 35-oz water tank is removable for easy filling and the manual frother takes your simple (albeit marvelous) espresso shot to something even more — like a cappuccino! (Full review here.) 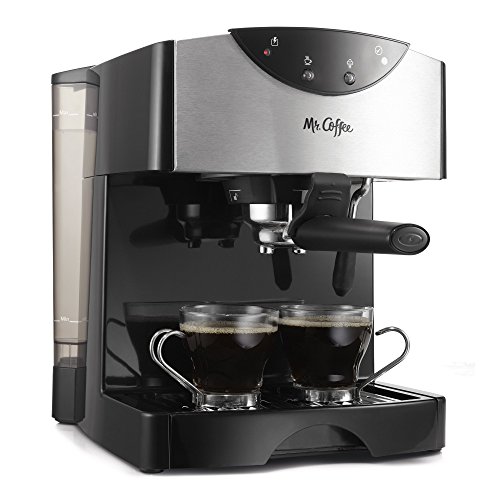 Mr. Coffee may have given himself that name, but he does know a thing or two about a smooth, velvety shot of espresso — even two.

Imagine this: two demitasse cups, 15 bars of pressure, and two caffeinated ounces. Time on the porch watching the sunrise, sipping your favorite morning drink, with your amor.

Alright, this may be more a scene from a movie than a typical daily routine in your household, but the Mr. Coffee ECMP50 Dual Shot Espresso/Cappuccino Machine is real — and it’s the real deal.

The thermal block heating system means you can have your morning dose as soon as you want it and the built-in frother makes a cappuccino a little bit of milk away. 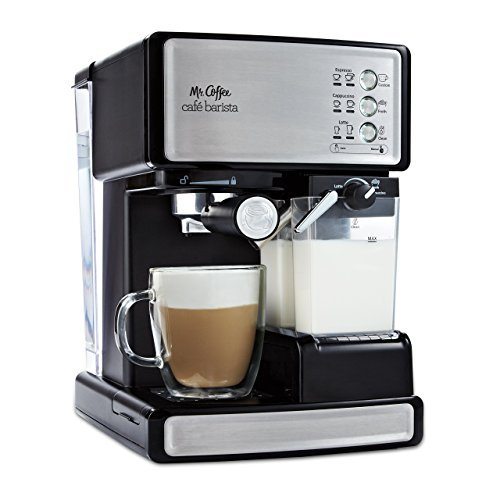 When it comes to your daily kitchen needs, this price range really adds on some luxurious features that will really make your cozy counter feel like a professional barista bar.

The Mr. Coffee Barista Espresso and Cappuccino Maker (ECMP1000) is a true testament to that statement. Just look at it. It’s semi-automatic and pushes out 15 bars of pressure to deliver your favorite coffee drinks — espresso, cappuccinos, and lattes — with ease.

Take note of the built-in milk tank, and think about what that means.

It means that it automatically froths your milk-based beverages for you. Let the excitement of that sink in. 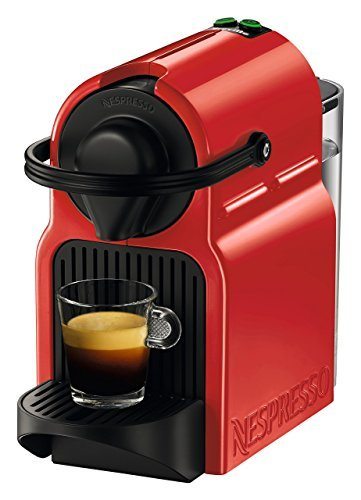 This little trucker pushes out 19 bars of pressure to deliver you a steaming demitasse of deliciousness. You can even have that midday pick-me-up in two different sizes, lungo or espresso.

If you’re new to the coffee connoisseur game, lungo is a popular way to enjoy espresso in Italy — it’s a larger shot, typically with twice as much water, and has a more bitter taste to it. Use that option at your own discretion.

This machine’s middle name is “immediacy,” no matter which option you choose. With just one button tap and 25 seconds, you’re ready to enjoy a caffeinated beverage before rushing out the door for that 9 to 5.

Check out our picks for the Best Nespresso Machines in 2022. 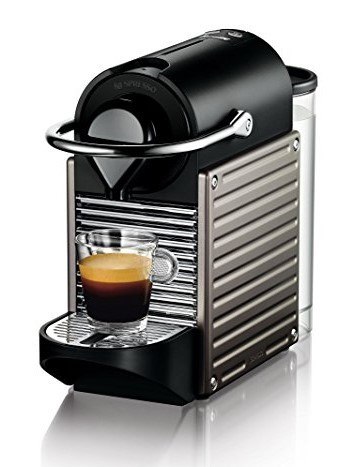 This is the Innisia’s big sister (the one that studied abroad and speaks a second language), and it’s stainless-steel casing is the biggest upgrade.

The 24-oz. water reservoir has red backlights to let you know when it’s time to refill so you know exactly what you need for that shot of espresso or lungo.

Top it off with a 25-second startup time, and you can have a dose of the good stuff even after hitting snooze a couple times. Or ten. Beauty rest is important — almost as important as your coffee. Also, make sure to check out our full review of the Nespresso Pixie. 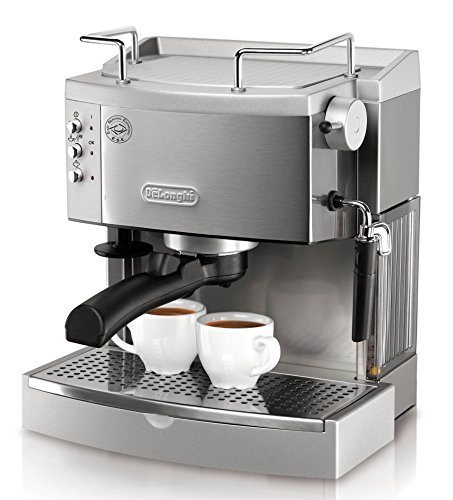 This is the sort of machine that makes you feel like a professional. It’s insta-worthy, and it’ll make your morning cuppa just as picture-perfect.

The stainless steel boiler and finish make this DeLonghi a chic addition to any kitchen, and you can share the joy with your favorite coffee-loving best friend since it can make two shots simultaneously.

Your fellow espresso enthusiast asking for an upgrade to their drink? Not a problem. The easy-to-use manual frother is located to the left and you can tell them that it’s so simple to operate that they can certainly do it themselves. 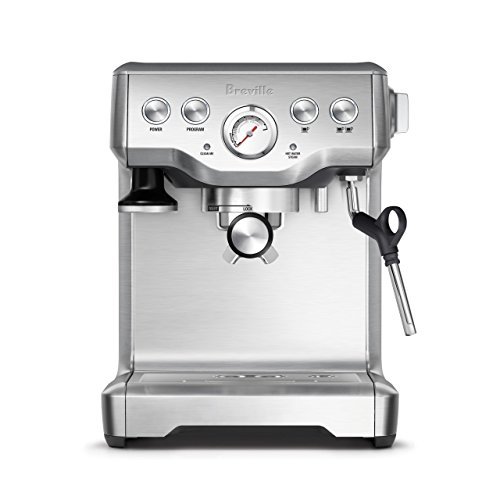 Low-pressure pre-infusion. Programmable volumetric controls. Stainless steel frothing mug. 1600W thermocoil. Electronic PID temperature control. I could sit here and keep throwing fancy words at you, but let’s talk about the magic that it drips into your demitasse.

The pre-infusion thing sounds like some fancy hippy term, but it has an extremely attractive perk: it expands the grounds for an even pull.

There’s a cup warmer on top of the machine, the extra water is drained from the filter so the clean-up is easy-peasy, and there’s extra-tall cup clearance that accommodates travel mugs.

When you pay dough like this, you’re paying for the quality of the machine, the luxurious features that add completeness to the experience that is called drinking coffee. Read even more in our full review of the Breville Infuser.

It’s the morning. You’re groggy. You need caffeine to wake up. The Gaggia Classic is ready for you, in whatever state of half-asleep you’re functioning at.

This model has a ceramic burr coffee grinder and bypass doser so you can dump full or pre-ground beans into it.

The reservoir is located in front for easy removal and hassle-free refill, and the Panarello steam wand has intake holes that siphon air directly into the milk for a frothy, delicious morning treat before taking a step out of your dwelling. Full review here. 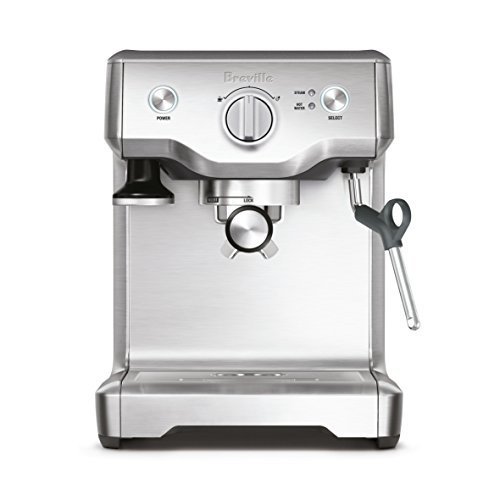 Make dual shots of espresso, froth milk directly from the built-in container, and manually control the volume of the drinks — it’s all included in the Breville Duo Temp Pro Espresso Machine.

With the 61 oz. water reservoir, refilling is far and few between, and the machine heats up in 25 seconds.

It even starts with low pressure to spread the grounds for an even pull on each and every espresso shot.

Usually, I have a few answers to the final “winner.” It all depends on what you want from the machine. Out of all of these, though, the Mr. Coffee Barista Espresso and Cappuccino Maker rings the truest to me.

It has a great value for what it offers, which includes automatic cleaning and automatic frothing of milk-based drinks.

The largest complaint was that it can be a tad bit loud which I, personally, will happily live with for a barista-quality drink without changing out of my sweatpants.