What does that word “best” even mean? There have to be parameters on what defines it— so let’s wander down what makes one roast of coffee “better” than another, this type of bean more desirable than that one, and so on. Then, and only then, can we really break down what it means to be included in the best coffee beans of 2020.

How to Choose the Best Coffee Beans 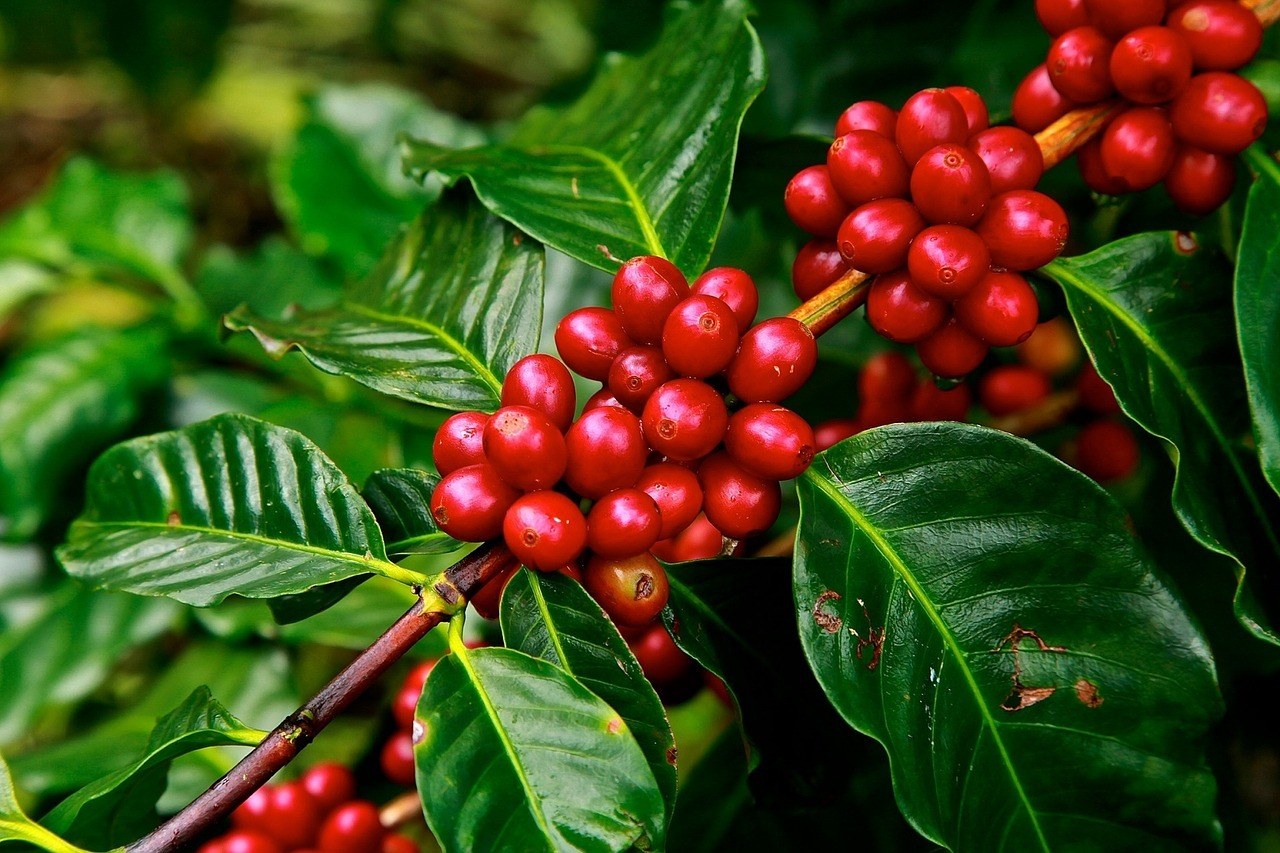 There’s so much about coffee that’s so very personal.

Do you drink it black or do you mix in some creamer?

What are you drinking coffee for?

Is it because it’s your literal life blood and you’ll suffer withdrawal if you don’t imbibe a certain amount?

Or do you roll a bit more casual than that, ya know, and just drink it now and again when you think to?

You can pick a point somewhere in between those two extremes, though. Obviously.

Wherever you drop your marker, you’ll have to think about the caffeine level you’re looking for (max), the acidity (low), the body (full), and more.

It can seem a like a lot to think about, but there are some simple correlations you can use for starters.

It’s 11th century Ethiopia and people have stumbled across red, cherry-like fruit that smells vaguely like jasmine growing in the wild. Of course, they boil it and drink it because, well, what else do you do with foreign fauna growing on the outskirts of town? It’s declared magic and it was only a matter of time before other countries wanted it, too.

Coffee cultivation spread across the Arabian Peninsula, and Yemen drank coffee the same way as the Ethiopians, boiled, for the next 300 years.

It wasn’t until 1555 in Istanbul that we start to see the coffee roasted, much the way we do today. 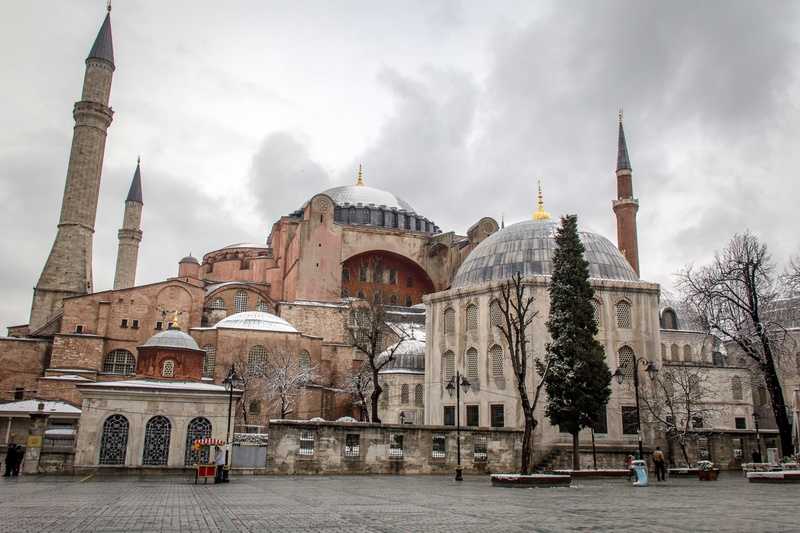 After roasting, they finely ground the fruits and cooked them with water over the ashes of a charcoal fire.

It was also in Istanbul that the first coffeehouse, named Kiva Han, came to be, and it was quickly followed by many others just like it.

You might’ve thought that I’d forgotten to mention Italy, but I haven’t.

Coffee didn’t make its way to Venice until 1615, and the first coffeehouse didn’t pop up until 1645.

At this point, coffeehouses, artists, literature, and travelers were all inextricably connected, and that would continue through the ages as this fruit traveled to Marseilles, Paris, Vienna, and London. Holland, Germany, and America followed.

While this has been an abridged history of coffee (I left out the part where Germany considered coffee a beverage of nobility for over 30 years before allowing the average layman to drink it), it’s probably more than you need to know to pick out a coffee bean, realistically.

But, for those of you that find the wonder in history, that one was for you.

Geography, however, does play a significant role in every single bag of coffee up for sale.

If you’ve been mostly drinking from your local Starbucks or Dunkin’ and want to broaden your horizons, it might be best to start with Central American and Colombian beans from another company — they’ll be the most familiar to you.

This is one of the easiest ways to guess whether you’ll like a type of bean or not: where was it harvested from?

Brazilian beans can boast chocolatey flavors, while Hawaiian ones are more flowery. Ethiopian coffees can be syrupier, but they also often have overtones of strawberry or blueberry. Basically, the soil has a lot to do with what the coffee tastes like, so take notice of where the beans are collected from!

Lastly, the easiest distinguishing feature of coffee is regarding the color, and it has nothing to do with caffeine level — the lighter the bean the higher the acidity. Light roasts often retain notes of their origins, too, which we’ll get more into in just a moment. Dark roast coffees, on the other hand, have bolder flavors and richer tastes.

How to Pick the Best Coffee Beans

This is it — the last thing. I promise.

It does matter how you buy the coffee, in particular, whether it’s pre-ground or whole bean. (Instant coffee has its own unique criteria, which you can read about here.)

Listen: I’m the last person to judge anyone for buying a bag of ground coffee. I have a whole bag of Dunkin' Donuts pre-ground coffee from Costco hanging out in my cabinet, but it’s leftover from my pre-enlightened phase.

Buying whole bean and grinding it in small batches, as needed, is a totally elevated experience compared to the pre-ground stuff.

Leaving it in a whole-bean form retains that freshness and flavor for a truly satisfying cup of joe. 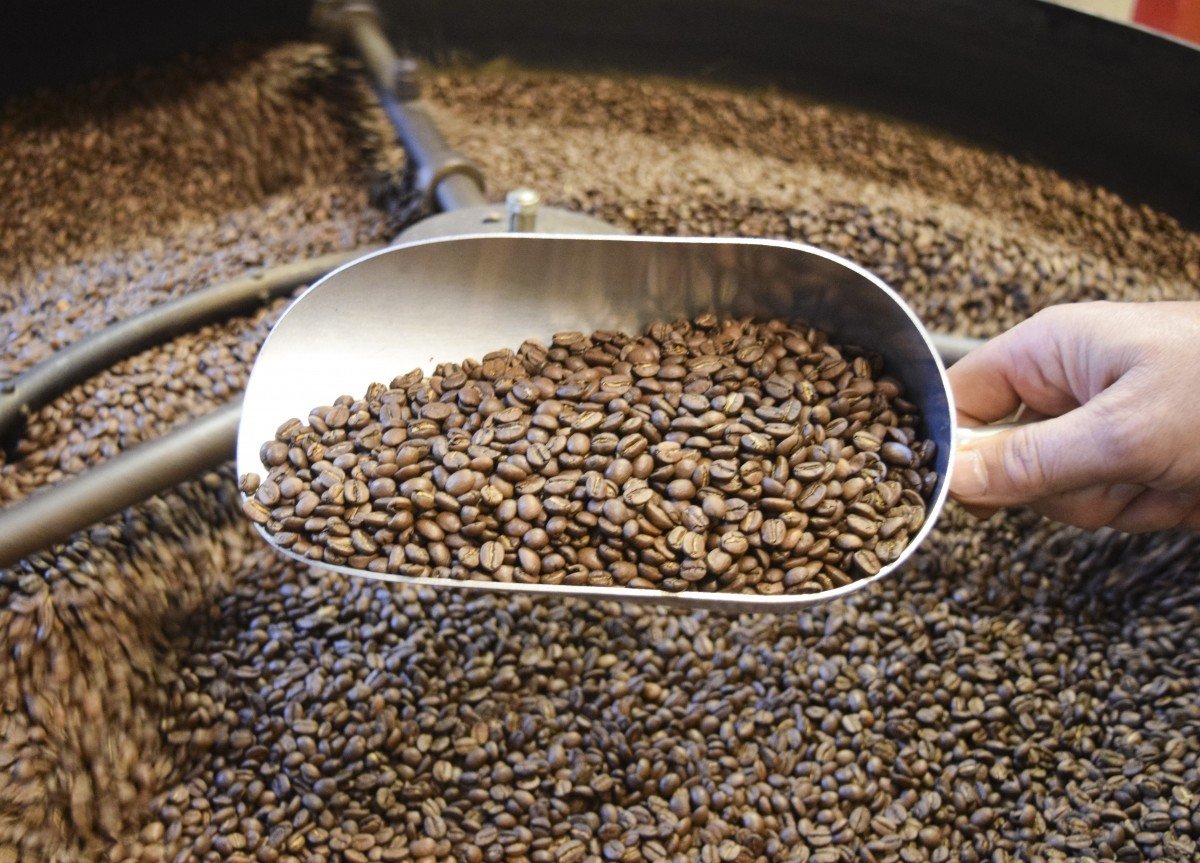 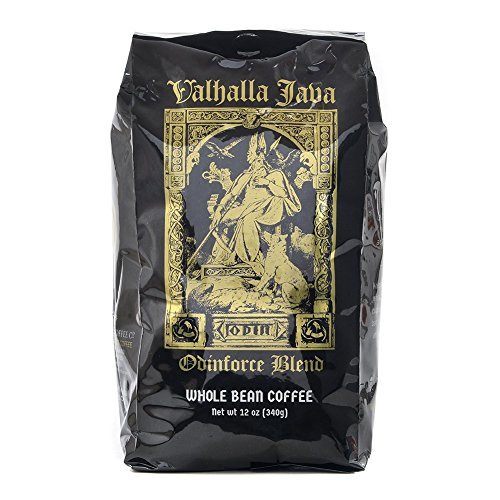 With their crew of trendy, badass hipsters, the Death Wish Coffee Company started in 2012. They roast an enjoyable cup of coffee or your money back, and they’re the best thing regarding coffee that’s ever come from the Super Bowl. Really.

While the company isn’t everything, it’s always cool when there’s a nifty story behind a product, right?

The Valhalla Java Whole Bean Coffee was created for “legendary guitar god Zakk Wylde” and it’s a good choice if you’re transitioning from a life drinking the ‘bucks.

It’s harvested from Indonesia, Central, and South America. It’s rich aroma is complemented by a nutty, chocolaty flavor that may have you reaching for a cup of Joe rather than a sugary snack. We’ll keep hoping, right? 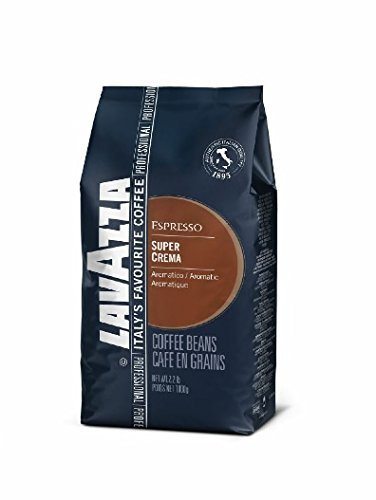 When you’ve been successful since 1895, it’s inarguable that you’re doing something right.

Lavazzo is that company, and Luigi Lavazzo was the man who made it happen way back when.

Lavazzo has become a powerhouse in Italy, and the Super Crema Whole Bean Coffee Blend is one of the many reasons why.

It’s a super smooth medium roast and it’s sourced from a number locations, including Brazil, Indonesia, Columbia, and Vietnam. This all comes together and results in a honey and dried fruit taste that’s suitable for a wide range of brewing methods — it’s especially touted for use in espresso, so get your demitasse cups ready! 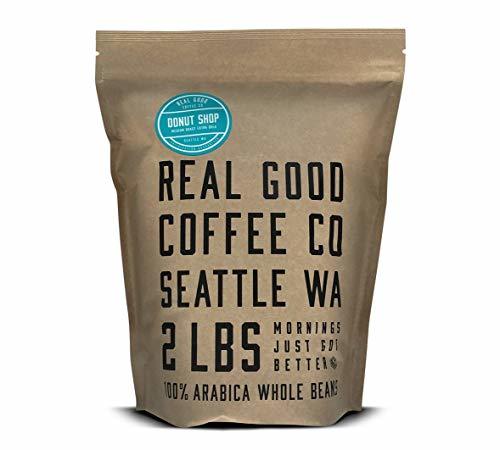 Do you ever come across a product that has and does so many things that you just… stare for a long time. You have to process it. That’s the feeling you get when reading about Real Good Coffee Co.’s Donut Shop Medium Roast Coffee Beans.

Real Good Coffee Co. has 30 years under its belt, and it’s used every nanosecond advancing their coffee methods, from beginning to end.

Their Donut Shop Medium Roast is comprised of high-quality Arabica beans from South and Central America that are packaged in recycled materials. Known for its bold, smooth, and sweet taste, you won’t regret giving this roast a shot! 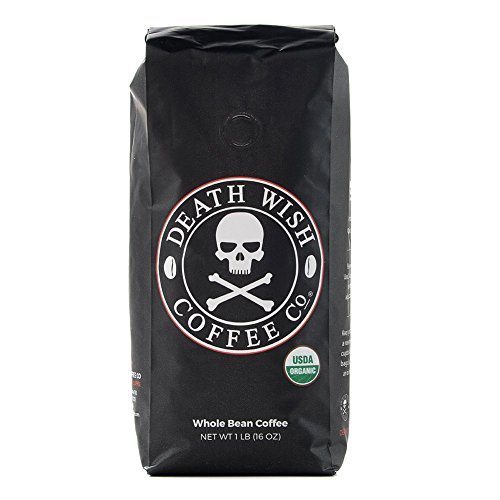 “My brothers! What is life if not to die a glorious death!” ...by caffeine. That’s what I assume Death Wish Coffee Company really meant in their 2016 Super Bowl ad.

This Organic USDA Certified Whole Bean Coffee is their pride and joy, their strongest cup of coffee, the one you should definitely put into your cart, into your cup, and then into your gut. ASAP.

It’s cherry, it’s chocolate, it’s actually a dark roast coffee that’s never bitter. It’s backed by a 100% satisfaction-guaranteed warranty and there’s a top-notch customer service experience to go with it, so why not give this whole bean a place in your morning routine?

This is the second time we’ve listed the Death Wish Coffee Company.

In case you weren’t keeping track. 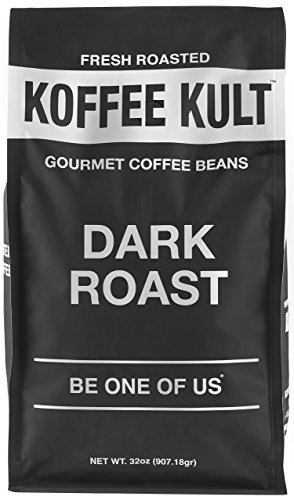 If you’re like me and are impressed by a flavor-rich dark roast, then you need to give Koffee Kult’s dark roast a try.

Koffee Kult is a very reputable, environmentally-friendly company and they work directly with farmers where the beans are harvested, particularly in Columbia, Guatemala, and Sumatra.

For the true “Kult” fans, they have swag for you to proudly show off your dedication, and you can feel good about swigging down cup after cup of this limited-release joe. You’ll detect notes of cinnamon and your stomach will appreciate the low acidity!

Let’s take a closer look at what distinguishes their company and coffee. 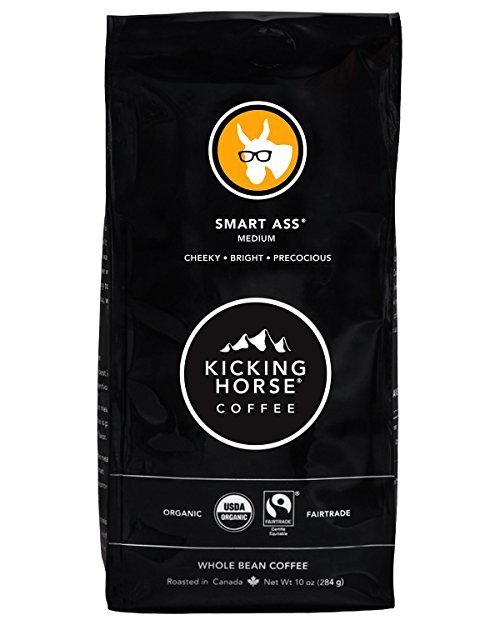 A kicking horse is a distinct image in your mind, and, much like that picture, this Medium Roast has a memorable flavor.

If you need more than the chuckle that comes free from the name of these beans to convince you that this bag should have a place on your shelf, this is the #1 selling whole bean coffee in Canada! Kicking Horse Coffee roasts at 3,000 feet up the side of the Canadian Rockies and that altitude makes for a mean morning wake up! 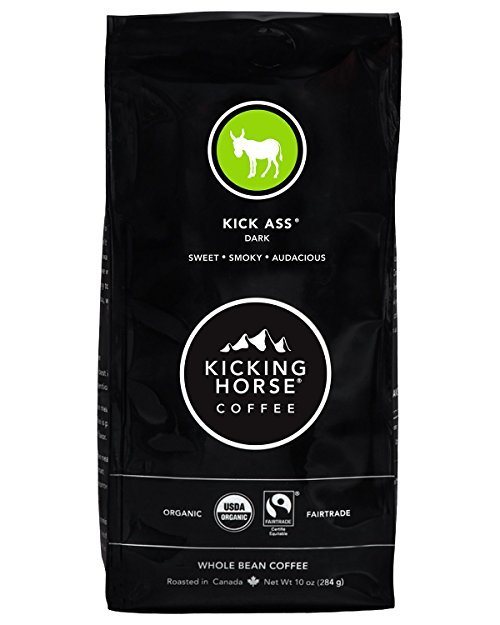 Have you ever drank a cup of coffee that was described as “audacious?” It’s time you did. Kicking Horse Coffee takes another spot on our best beans of 2020 list with Kick Ass, a dark roast that’s saucy, brazen, and jaunty — yes, I’m having some fun with words over here.

This coffee has notes of licorice, chocolate malt, molasses, and the earthy flavor will linger in your mouth long after you’ve set your mug down. 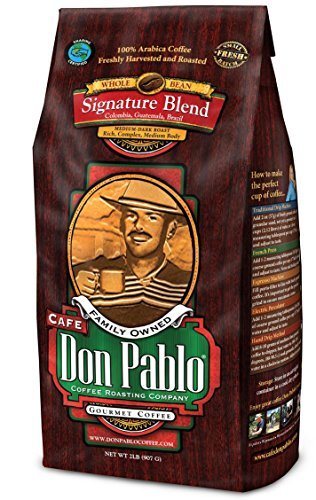 Complexity comes from being multifaceted, and Cafe Don Pablo’s Signature Blend reaches that intricacy by combining a blend of beans from Columbia, Guatemala, and Brazil. This trifecta is a medium roast with a cocoa-tone finish that’s made even more desirable by its low acidity — if you’re a daily coffee drinker, this is one of those key factors that you’ll come to appreciate.

If you’re just as interested in the company that you’re purchasing coffee from as well as the richness of the whole beans, Don Pablo is the kind of roaster you can be proud of — they run a Certified Sharing Program that’s responsible for 1,000,000 coffee trees planted in South America.

They never mix in Robusta (a lesser type of bean than Arabica) like many other brands do, and they have an on-staff Q grader to ensure the quality of all of their small-batch roasts. 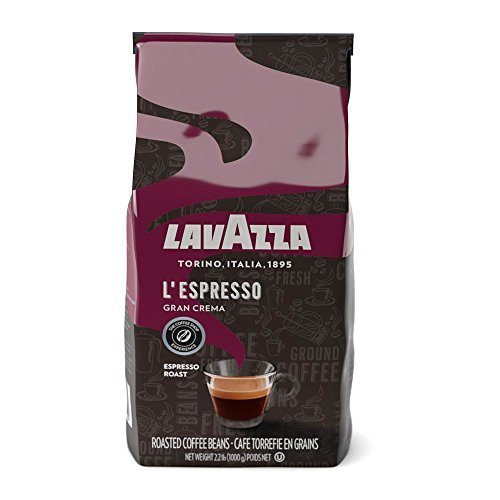 If espresso shots are how you survive your day, the Lavazza Gran Crema Medium Espresso Roast is the bean you’ve been searching far and wide for.

Chocolatey, spicey, and lingering, whether you drink this out of a demitasse cup or not, this two inches of the good stuff will inspire your taste buds and follow up with a nice jolt of caffeine. 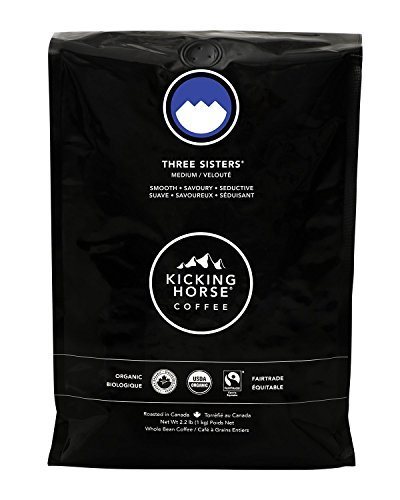 You know that old saying, the best of both worlds? Forget that. This is the best of three worlds. Kicking Horse Coffee pays a honorable tribute to a trio of peaks in the Canadian Rockies, and they’re represented beautifully using a blend of light, medium, and dark roast coffees in a single bag.

“Best” is always subjective to your own particular taste buds, but we can talk quality.

The ten listed above, these best coffee beans of 2020, are quality whole beans that are altimeters (literally) above what you get pre-ground at the grocery store. Also, no two brews will ever be the same.

Be warned, though: once you taste the quality of these ten, you’ll never be able to unlearn about it. Ever. That we can promise, dear coffee lovers.