For many, coffee -- and especially caffeine -- is the best part of every morning. Several coffee bean companies realize this and have begun to offer the “world’s most caffeinated beans!” according to their taglines, but what does that really mean? How much more caffeine are we talking about and is there really more or is it just something the company is saying?

The long and the short of it is that it’s hard to prove, but we can make a few finite judgments (and some good guesses) by understanding the basics of caffeine.

The average 8 oz. cup of coffee contains between 95 to 200 mg of caffeine, while the average shot of espresso has between 47-75 mg. On top of being dependent on the variations in the coffee blend, caffeine is also affected by the amount of ground coffee brewed, the type of grind, and the brewing style.

While we treasure Arabica for its quality, its complex tasting notes, and smoothness, the fact is that Arabica’s rougher, tougher sibling, Robusta, actually offers more caffeine. This isn’t us encouraging you to drink more Robusta necessarily, but it’s certainly something worth knowing.

The roasting style also affects the caffeine content. At the top of the rung, offering the most caffeine per 8 ounces are two methods, percolated and Turkish coffee, which average around 200 mg per cup. Both of these brewing methods tend to be more bitter and, especially when it comes to Turkish coffee, typically take advantage of the hyper-caffeination in Robusta.

Drip or filter coffee, the most common method in today’s households, clocks in second on the rung and averages about 145 mg per 8-ounce cup, while French Press or plunger brewing methods fall below that at roughly 108 mg of caffeine.

There’s also that matter of grind type — the finer the grind the more caffeine the brew is going to have since there’s more surface area to soak up the good stuff. So, basically, if you want your drip coffee to be a tad bit stronger than it is now, lean your grind on the finer side of the spectrum for drip coffee, which traditionally uses a medium grind. It’ll be a guessing game at first, but you can get some extra milligrams of precious caffeination once you get it right!

To recap: Caffeine content in coffee is affected by three distinct aspects:

The type and/or blend of coffee used

How fine or coarse the grind is

Alright! Now that we have the basics laid out pretty clearly here, let’s take a look at some brands that thrive on marketing their high caffeine levels 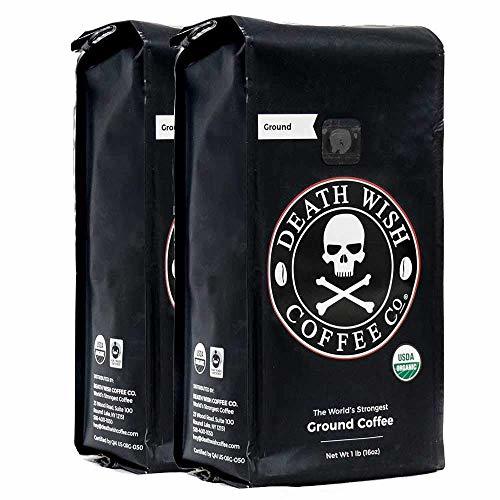 Likely the most well known, Death Wish Coffee rose astronomically in popularity after a 30-second commercial during the 2015 Super Bowl. Years later, the company is still going strong and providing coffee twice as strong as competitors.

Using a combination of Arabica and Robusta Fair Trade Beans that are USDA certified organize, Death Wish promises a smooth, never-bitter taste. Plus, if it isn’t the strongest coffee you’ve ever had, they offer a 100% money-back guarantee.

They also have great merch. I don’t know about you, but I always appreciate some great merch. They sell a drinking horn and other cool stuff. 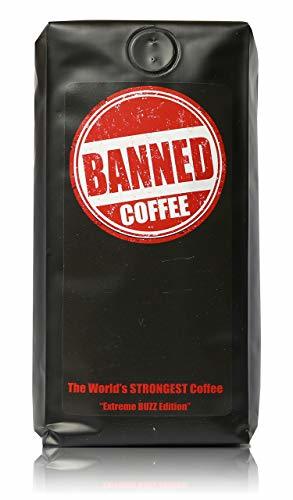 Their “hyper-caffeinated” coffee is a blend of both Arabica and Robusta medium and dark roast beans. They promise it’s never, a frequent complaint regarding high caffeine brews, and also feature low acidity, an odd but pleasant characteristic for those with sensitive stomachs. 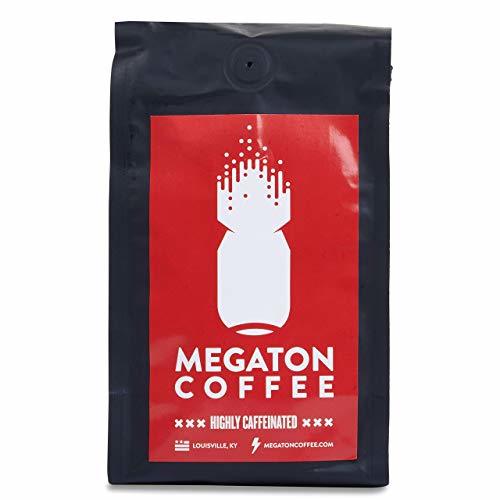 Megaton Coffee was designed with athletes in mind to compete with things like pre-workout mixes and energy drinks, making it stand out a bit from the rest of the lineup. What makes it a lot like the other iterations on our list is the caffeine claim.

Promising twice as much caffeine as the standard cup, Megaton Coffee is comprised of beans hailing from South America and the Asia Pacific. It’s also a blend of Arabica and Robusta, which took a bit more snooping around to determine, which isn’t surprising. They’re roasted in Fort Wayne, IN, in small batches with no additives.

There’s also a 100% satisfaction guarantee, so why not give it a shot? 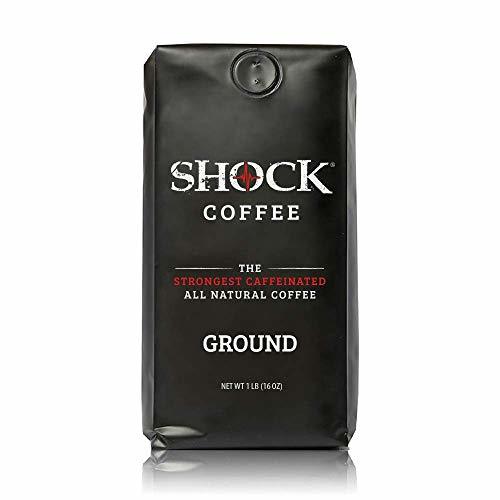 Generally speaking, most non-flavored coffees are typically “all-natural.” Not to be hypercritical, but it feels like when vodka companies started putting “gluten-free” on their bottles. Like… okay, duh. There shouldn’t be any grain in there anyway, so… what’s your point?

Anyway. Shock Coffee promises up to 50% more caffeine than the standard cup without sacrificing flavor. They use a similar method to brands we’ve looked at before, using a combination of Arabica and Robusta to get the best of both worlds. Shock’s roasting facility down in Mississippi cares for them until they’re a lovely medium-dark before bagging these bad boys and sending them out!

Wake The Hell Up Coffee 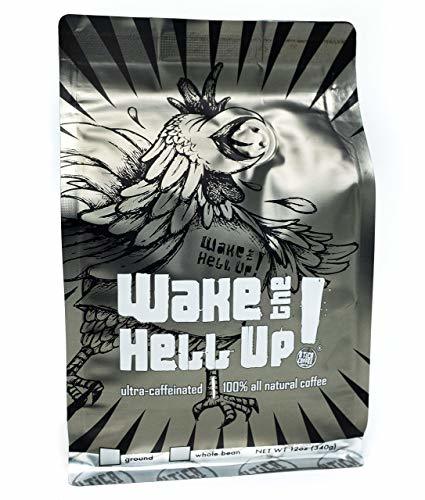 Wake the Hell Up coffee is the name of the brand, and waking you the hell up is their game. Created by the Utica Coffee Roasting Co. in Utica, New York, the company has a really gutsy vibe about them.

In 2002, they opened up a coffee shop in a depressed area of Utica, hoping to revitalize the community. Along the way, they developed Wake the Hell Up to provide ultra caffeination. Made from a combination of Central and South American beans, this medium-dark roast is likely a mix of robusta, or at least partially robusta. There’s no indication made on either the bag or the site, which leads me to believe it’s not 100% Arabica — that’s something you blazed across the front of the bag.

Robusta has a bad rap sometimes, it’s just not as complex tasting as Arabica, but that doesn’t mean it doesn’t have perks — like, for instance, the huge jolt of caffeine. 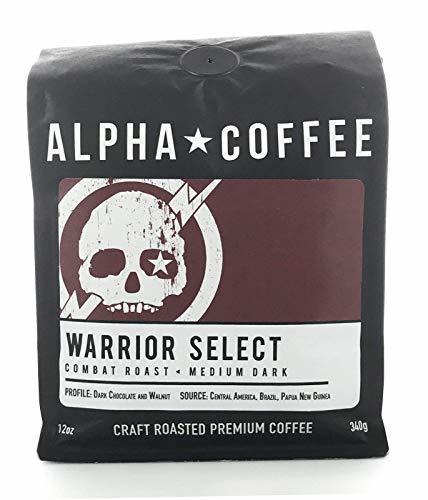 There’s no headline to brandish here, but Alpha Coffee has created a beautiful trifecta of pulling at the heartstrings. Co-owned by a veteran and army wife, Alpha Coffee began back in 2011 and has grown to include a brick-and-mortar coffee shop in Utah.

A portion of every batch they brew is dedicated to troops downrange and the company also supports a variety of charities that support veterans, as well.

Alpha Coffee was initially called Lock-N-Load Java, but rebranded to better encapsulate their “warrior lifestyle.” Warrior Select is their creme-de-la-creme— they don’t have a house blend, but even their website states that if they did, this would be it. The blend is 100% Arabica with a combination of beans from Brazil, Central America, and Papua New Guinea.

There’s no definitive quantity of caffeine advertised, but it’s supposedly got a lot of it! 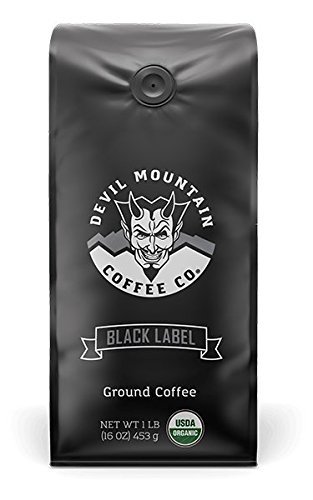 Tagline: So Powerful… It’s a Sin.

Outside of that, there isn’t much information provided on the bag, or on the website. The big claim is that they have “the most powerful coffee in the world without compromising on flavor.” They guarantee an increase in productivity for a number of their blends, so taste for yourself! 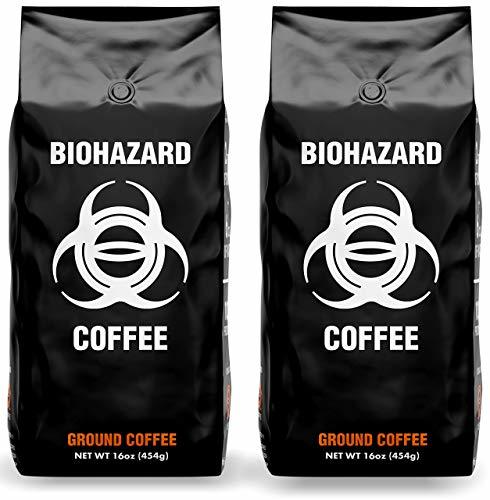 I have to give Biohazard some props because they are straight up about trying to give everyone who drinks their coffee a heart attack. With a whopping 928 milligrams of caffeine per 12 ounces, it was tested as recently as May 2017 by Certified Laboratories in NYC.

If you’d rather break this down by ounces, there is 77.33 mg of caffeine in each ounce. That’s the same amount in a typical shot of espresso. The beans are Robusta and really demonstrate the difference between Arabica and Robusta when it comes to caffeination.

When giving Biohazard a shot, just be aware that what may have been 4 cups before is now one cup, and one cup might be a quarter cup. This stuff has enough caffeination to wake the dead—without added sugar. 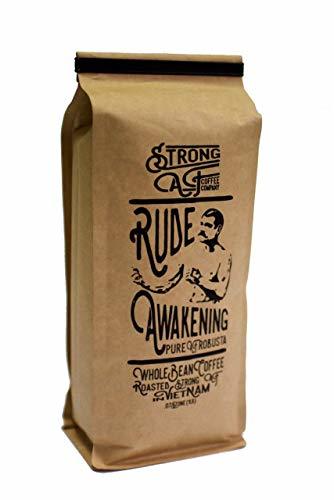 If you’re familiar with Vietnamese coffee and find its pure dedication to caffeination to your liking, Rude Awakening by Strong AF Coffee will likely speak to you. The mission of the coffee is right there in the name of the company — Strong AF coffee. That’s the entire business model.

True to their word, they use the most caffeinated strain of beans: Robusta. Rude Awakening is 100% robusta and hails from Vietnam, where the dark beans are hand-selected and “small batch quality.” The artisanal farms the beans come from are pesticide-free, which is always a nice bonus. 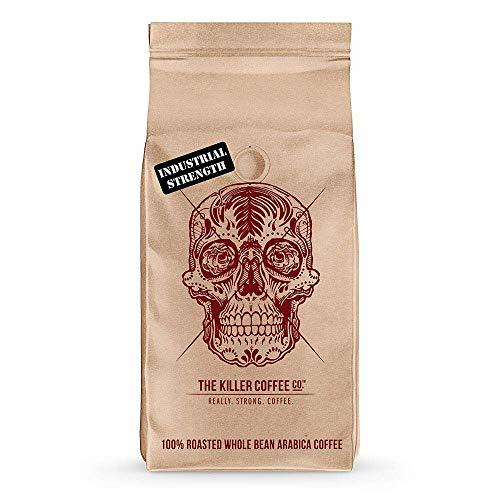 The Killer Coffee Co. offers minimal information about themselves or the beans they’re selling. The beans are hand-selected Arabica from South America and Africa, but that’s about all they’re letting out from between their tightly pursed lips. You fight the Australian from down under to find out more.

Each cup of their Really Strong Coffee is dark roasted and boasts 53.2mg/fl oz caffeine, which, through some quick math, says that each 8-ounce cup of coffee provides 425.6 mg of coffee, which a good damn amount. It promises a bitter-free morning cup, though, so it could be worth a go! 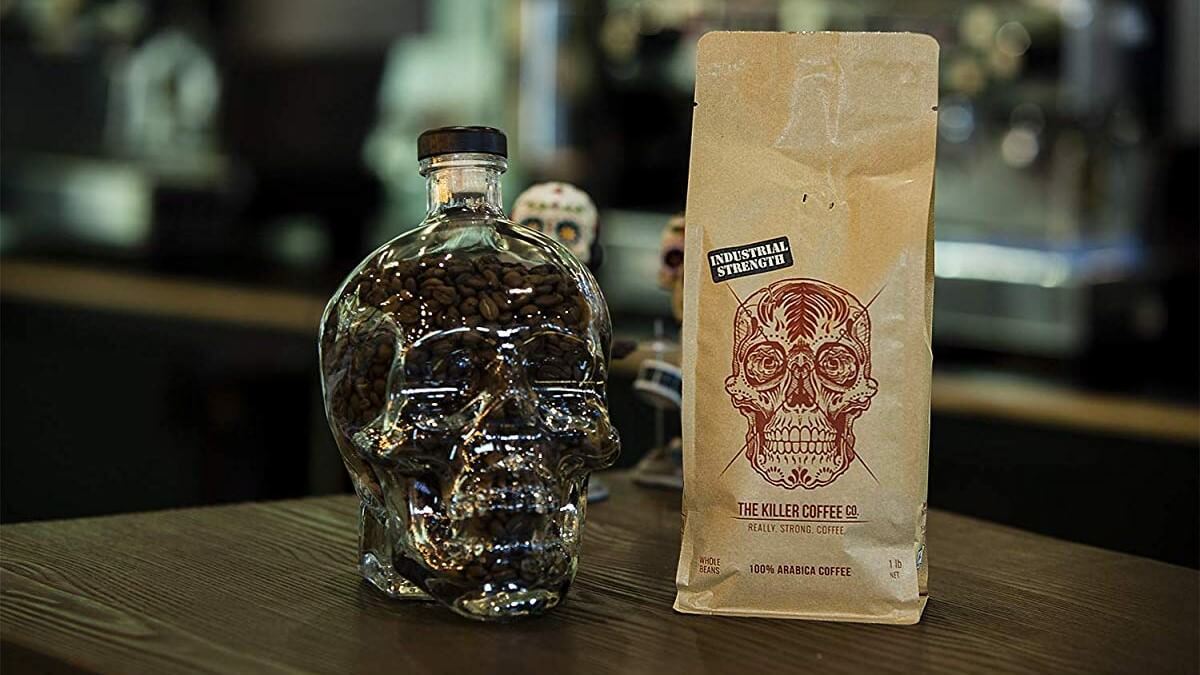 The fact of the matter is, a lot of coffee companies like to throw around “the world’s strongest coffee” thing and, for the most part, there’s really no easy way to determine who really does.

The most reputable culprit is likely Death Wish coffee, which has its own cult following and is under enough public scrutiny that there must be something to the claim. Heck, their coffee went to the moon! (No, really.)

Wake the Hell Up! speaks to the community aspect of loving coffee while Megaton speaks to the athletes looking for a bit of a pick-me-up before their next big event. There are a lot of brands out there offering extra caffeination and it just ultimately comes down to what jives with your vibe and a few taste tests.

Pick your extra caffeinated morning brew and leave a review — that’s how coffee lovers help other coffee lovers. We’d love to hear your opinion over here at Coffee or Bust, so hit us with your favorites! Happy brewing!