Sumatra coffee comes from an island in western Indonesia and is lauded for its earthy and chocolatey tones, as well as its low acidity. It’s a popular bean in the coffee industry, and you can certainly find it at the coffee shop on every other corner.

There’s a lot more entangled in Sumatran coffee, including the reason why “java” is synonymous with the word “coffee” and a significant processing method called “giling basah.”

Quick Navigation
Sumatra: A Coffee Paradise
Mandheling Region
Lingtong Region
Gayo Region
So, Indonesia Has Been Growing Coffee Forever?
What is the “Wet Hulling” Process? Is That Where A Monkey Poops Out the Beans?
So, is Sumatra a Dark Roast Coffee?
Sumatra Green Bean
Sumatra Coffee Beans
Best Brewing Methods
In Conclusion

There are a few requirements for growing great coffee, and Indonesia features them all. The island of Sumatra features interior mountain ranges and a location near the equator, meaning the geographically and climatologically an ideal place to be growing coffee. The soil is dark and volcanic, clocking in at pH levels of 4.5 to 5.5, and has a 10-month rainy season with only two dry months — all supremely ideal for natural irrigation practices.

On top of requiring low maintenance from the farmers, it also creates a surprising problem: coffee grows all year round. There are two distinct harvesting seasons where the bulk of coffee is collected, but farmers can expect to see buds and fruit all year round.

Sumatran coffee comes from three regions on the island in particular: Mandheling, Lintong, and Gayo. A number of varietals can be found in these regions, which Leo and Lisa who actually live in Sumatra can break down in detail for you. As for us, we’ll take this region by region because, to be honest, there’s a lot to break down here. 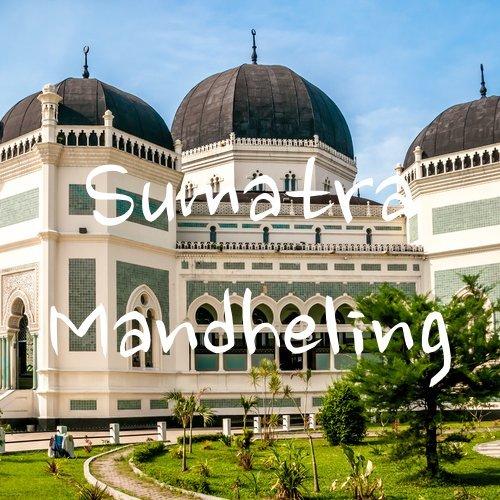 There’s a bit of confusion over the term “Mandheling,” to be upfront, because it’s partially considered the trade name for all Sumatran coffee from the northern region, but it can also refer to a specific region near Pandang and named for the Mandailing people, a local tribe. Some claim it’s just a marketing gimmick and some claim it only applies to a specific region. We’ve tried our best to find you the truth, but sometimes the truth gets stretched and it just doesn’t snap back into proper shape.

This is one of those times.

If this regional coffee is truly a thing, it’s noted in a few places that Mandheling coffee is known for its low acidity (the same with all Sumatran coffees) as well as its chocolatey and spice-like flavors, including cardamom, cinnamon, and nutmeg.

This very real region (we promise) is on a high plateau known for its diversity tree ferns and, alone, produces 15,000-18,000 tons of Arabica coffee per year. Southwest of Lake Toba, the deepest lake in the world, the coffee grown is remarked upon for its unique cedar and spice flavor. Higher in acidity than its brethren regions, Lintong region coffee still features a medium body, a certain sweetness, and a nice earthy aroma.

Gayo region coffee is typically grown between 1,110 and 1,600 meters above sea level and has the honorable distinction of producing the first product in Indonesia to receive a Protected Geographical Indications (PGI) status from the European Union (EU). The authentication stamp is backed by a guarantee that the product is what it says it is and prevents name abuse.

Gayo is remarkable for a few other reasons, too, including that coffee growers take the long road—something that has clearly paid off. Their beans are grown under shade trees, which is incredibly environmentally responsible, but also requires a longer maturing process. On top of requiring little to no chemicals such as pesticides or herbicides, the trees also filter out carbon dioxide, a primary cause of global warming. The slower maturity process also encourages more natural sugars to develop, enhancing Gayo coffee’s flavor profile. 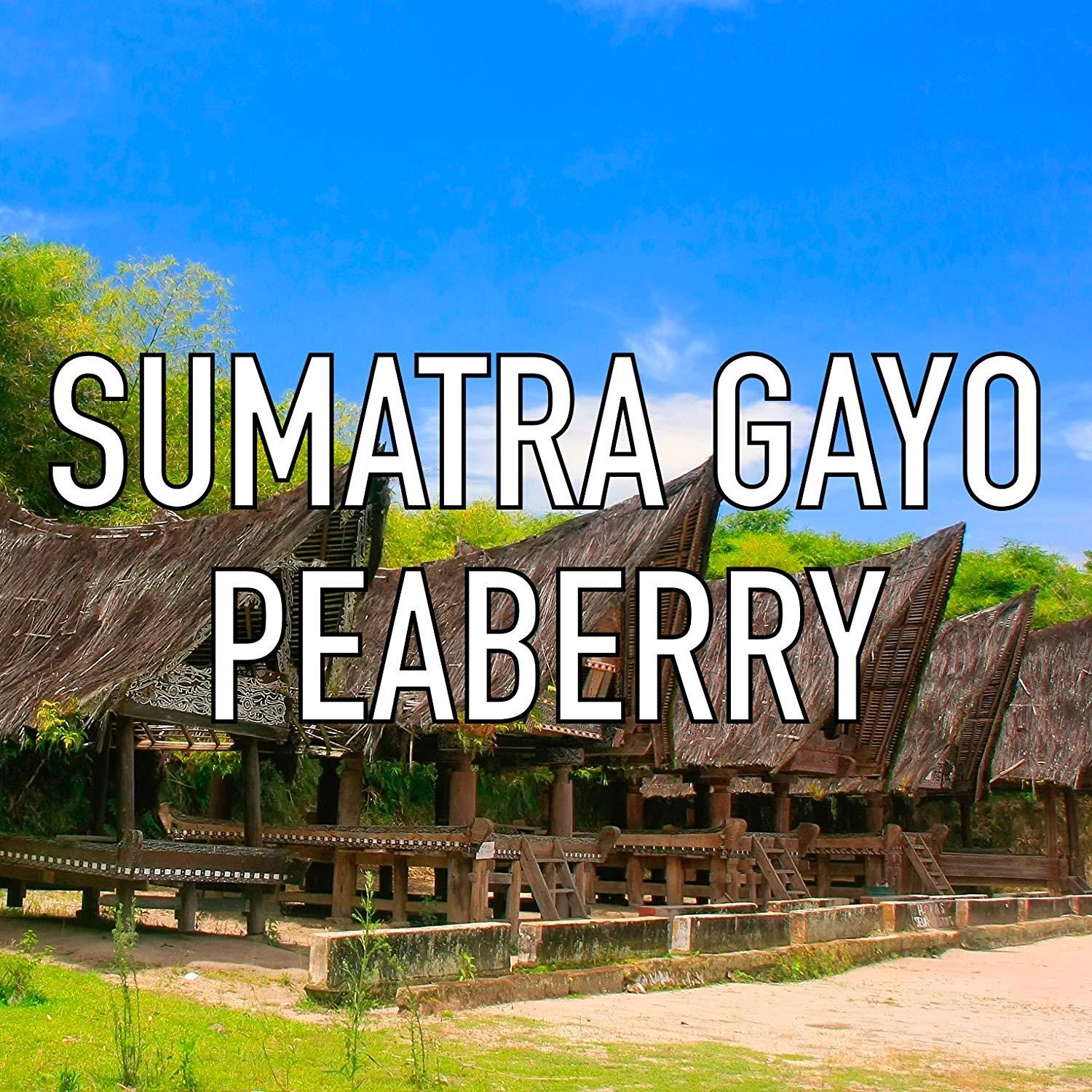 The island of Sumatra isn’t the only Indonesian island that grows coffee, though. All together, Indonesia produces somewhere near 660,000 metric tons of coffee (in 2017) and claims the title of 4th largest producer of this caffeinated good.

Of all of this coffee production, though, only 25% is the prized Arabica that we all prefer be in our morning mugs. As you could probably guess, what we’re talking about when we say “Sumatra coffee” is the Arabica, not the robusta, but there’s a time and place for everything, as the Vietnamese know too well.

So, Indonesia Has Been Growing Coffee Forever?

Not quite. It may be coffee nirvana, but coffee is native there. It, like many other things, was brought over from Yemen by the Dutch East India Trading Company, Vereenigde Oostindische Compagnie in Dutch, or VOC, more commonly. It was given to the Dutch Governor of what is now modern day Jakarta, on the island of Java in Indonesia in 1699.

It wasn’t until 1888 that the coffee bean was being planted all across Sumatra, processed, and sent back to Jakarta on Java Island.

Can you see where this is heading?

All coffee was exported out of the country through Java, with the very same name written in big, identifiable letters on the packages, and it quickly became a signifier for these delicious beans.

What is the “Wet Hulling” Process? Is That Where A Monkey Poops Out the Beans?

No! But, funny story, Indonesia is actually were kopi luwak comes from, coffee beans that have been digested and pooped out by an Asian palm civet! Though the palm civet isn’t a monkey, it’s a type of cat, but… we’ll say close enough. It’s quite expensive to try, though, but trying kopi luwak is certainly Instragram-worthy, no?

To highlight the largest difference, most freshly picked coffee fruit is left to dry in the sun, with the pulp, cileage, and parchment removed after the drying process is either semi or entirely completed, which can take anywhere from six days to three weeks.

Not so with giling basah, which is partially depulped almost immediately after it’s picked using a rustic pulping machine called a luwak (no relation to the cat poop coffee), but the primary takeaway from this is that the coffee fruit begins its depulping process while it’s still 100% wet.

Well, the exact same reasons Sumatra is a great place to grow coffee make it a difficult place to process it. The volatile weather and long rainy season mean that farmers may have only 4 hours per day to dry the freshly picked beans. It could take months to fully dry the coffee in the Sumatran region, which, honestly, who really has time for?

Under these conditions, there had to be some adjustments. The luwak-pulped fruit, still covered in a significant amount of mucilage, is stored for a day before being washed and dried to about 50% wetness before being given to collectors for further processing and selling to roasters.

So, is Sumatra a Dark Roast Coffee?

I can see how you would get that impression, but roasts are entirely up to the roasters. Beans can be used for any roast level, whether we’re talking light, Full City, or extra dark, it doesn’t matter. As a quick refresher, lighter roasts highlight the region where a bean is from, while darker roasts display the roaster’s process.

However, roasters tend to prefer dark roast for Sumatra coffees because it generally a little bit more forgiving but, in this case, it’s used to bring out the natural sweetness and chocolatey tones to go along with the earthy complexities of its cupping flavors.

It may also be because, in some countries, earthy tones, heavy with herbaceous flavors peat, moss, and wild mushrooms (all of which Sumatra tends to feature), is considered low quality. Professional coffee tasters prize it, comparing its intensity to high-end scotch, and it can certainly brage of significant popularity in the US. While it can stand confidently on it’s own, Sumatran coffee is often used blends because it complements most flavors and its low acidity is easier on digestive systems, which is always a bonus.

On top of being pleasant with many other coffee bean varietals, it’s also known for being quite forgiving to new home roasters. Sumatra Green Beans are affordable and easily attains a toasty medium roast, edging into a dark roast, making it a great bean to start with.

If you’ve been thinking about roasting your own coffee and waiting for a sign, here it is: use Sumatra Green Beans using one of the best home roasters we’ve so thoughtfully compiled for you.

Whether or not you’ve decided to embark on the wonderful adventure of roasting your own beans, you’ll want to brew this coffee to perfection. Just like its flexibility in blending with other varietals, it’s flexible in regards to brewing methods, too.

A classic Chemex will always get you a great cuppa, as will French Press, and Aeropress, but one of the preferred ways to enjoy Sumatran is through cold brew. It makes for a good shot of espresso, too, but wet-hulled coffee can be fussy to pull so it takes a little bit of fiddling to get it right — keep your shots short and monitor the temperature and it should all come out hunky-dory.

Everyone should try a single origin Sumatra coffee. It’s a big part of the history of java and offers a flavor profile you won’t find anywhere else thanks to its unique geography and climatology, not to mention giling basah!