The humble coffee bean has given us all so much, isn’t it time we return the favor? Thanks to the Technivorm Moccamaster KBT 741 Coffee Maker, now you have the chance.

With its sleek, modern design and high-end components, the Moccamaster KBT 741 is a top-quality coffee machine capable of treating your favorite beans with the respect they deserve. 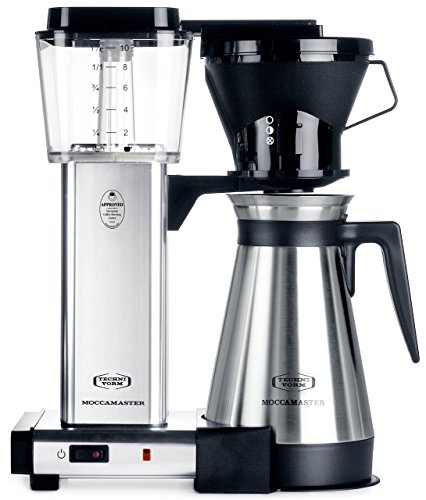 fair price according to its reputation in the industry

Read on, and we’ll take a closer look at everything you need to know about this coffee maker in our review of the Technivorm Moccamaster KBT 741. 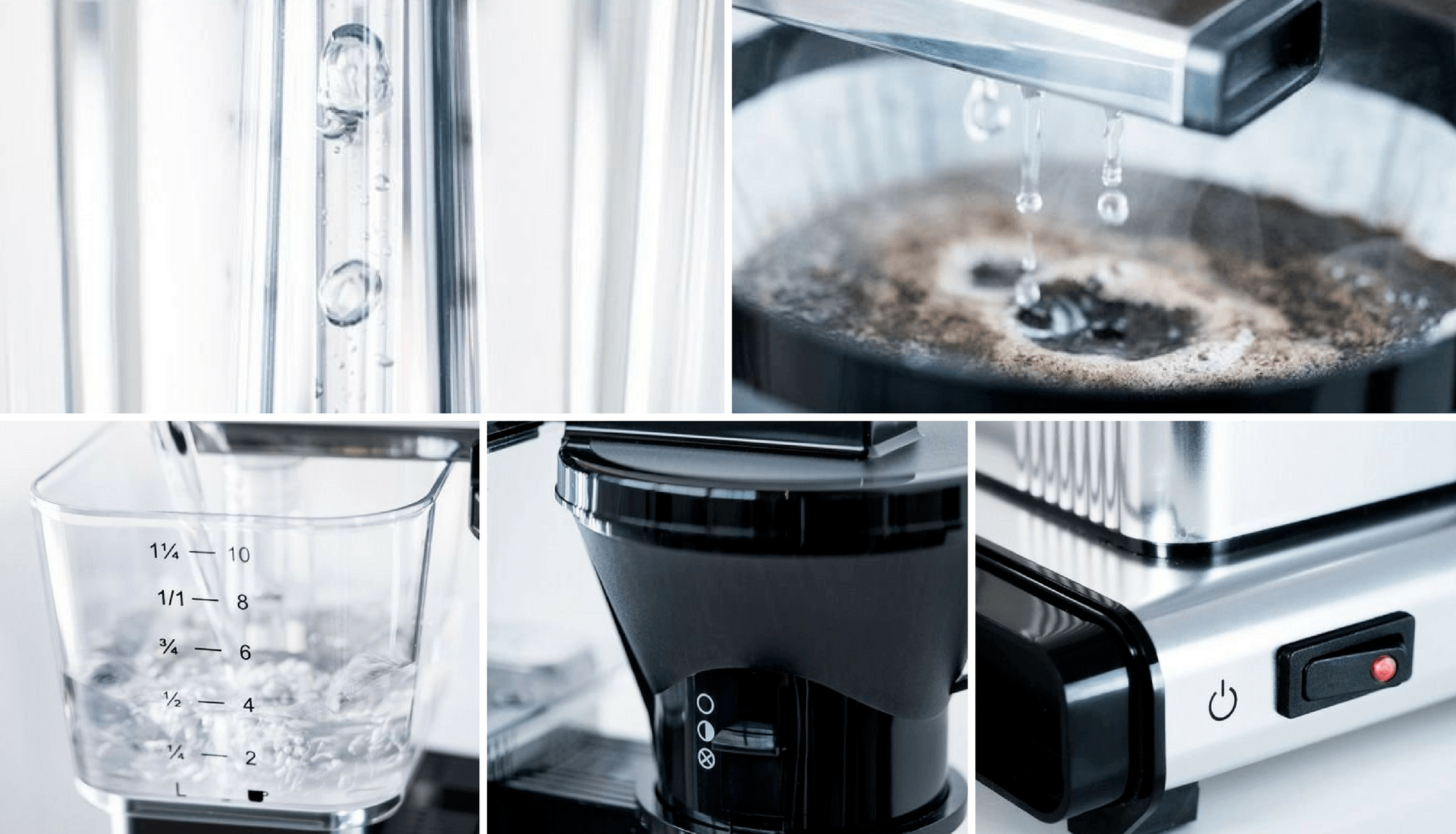 The Moccamaster KBT 741 has an intuitive design, and it’s packed with features that are sure to delight novice coffee drinkers and aficionados alike.

The KBT 741 uses a copper heating element to bring your water up to temperature rapidly. You’re able to tailor the temperature of your brew between 196 and 205 degrees Fahrenheit, which makes it easy to create the perfect cup suited to your tastes.

As you brew a pot of coffee with the KBT 741, a natural pulsing action that occurs inside the brew basket ensures that every coffee grind is fully saturated with water during the brewing process. This results in a more well-rounded and delicious cup of coffee.

The stainless carafe of the KBT 741 ensures that you’ll never have to worry about shattering the carafe. It will also keep your pot of coffee hotter for far longer than a glass carafe would. Coffee stays hot in the carafe for about an hour. If you need to keep it for longer, just add the travel lid after you’re finished brewing. With the lid on, your coffee will stay hot for six hours or more.

Technivorm pulls out all the stops when it comes to safety, and this model has several smart features that ensure brewing safety. For example, the machine won’t brew coffee until a small white button located on the base of the coffee maker is depressed, and that button can’t be depressed without the carafe in the correct position.

Another intuitive feature of the Moccamaster KBT 741 is Technivorm’s patented Brew Thru lid, which allows you to pour coffee from the carafe without removing or twisting the lid to an open position. The unique design of the carafe will enable you to pour coffee from any position. So, whether you’re pouring from the front, side or even the back, you’ll have no trouble pouring cleanly from this carafe.

Review of the Technivorm Moccamaster KBT 741

If you’re serious about your morning joe, this Technivorm Moccamaster KBT 741 review has everything you’ll need to know as you embark on your search for the perfect coffee maker. This model is packed with intuitive features and design elements that many coffee lovers are going to appreciate.

Any coffee lover will agree, that even the nicest looking coffee maker in the world is useless if it doesn’t brew great coffee, and that’s where the Moccamaster shines.

The Moccamaster consistently brews coffee of exemplary quality. The brew temperature is consistent, the extraction is optimal, and the result is a delicious, velvety smooth cup of coffee, regardless of the beans you choose.

Many quality coffee makers on the market are available at a lower price than this Technivorm model. But, if your motivation is the quest for the perfect cup of coffee, you’re likely to be pleased with the quality and consistency of the KBT 741. Most lower end drip coffee makers can’t hold a candle to the Moccamaster when it comes to brew quality.

Another stand out aspect of this machine is how well it’s made, and how easy it is to use. Technivorm prides themselves on being a company that only makes coffee makers, and that singular dedication is noticeable with the KBT 741.

Each component of the Moccamaster is built to last and engineered to perform at a high level. We also appreciated the level of thought that went into the design of the different components of this machine.

From the Brew Thru lid and easy to pour carafe, to the large opening on the water reservoir designed for easy pouring, each component of the KBT 741 is built for ease of use.

Each of the removable parts is large and modular, which makes it a breeze to disassemble the machine for cleaning. The intuitive design makes it just as easy to reassemble as well.

Unlike many other high-end coffee makers who don’t feature user serviceable parts, almost every aspect of the KBT 741 is removable, serviceable and replaceable. This model also includes an industry leading five-year warranty. But, it’s good to know that if something goes wrong outside of the warranty period, you’ll be able to easily replace the broken part so you can get right back to enjoying delicious coffee.

While the Moccamaster delivers high marks with regard to build quality and the quality of the coffee it brews, it isn’t without a few small caveats.

First is its size. This machine is rather large. At 15 ½” high by 10” wide and 6” deep, the Moccamaster occupies quite a bit of counter space. Since the design is so sleek and modern, it’s easy to forget that it’s so large. However, the size of the machine may be prohibitive for small kitchens, or kitchens that already have a lot of gadgets occupying counter space.

Next, there’s the issue of cleaning. While the Moccamaster is very easy to clean, it isn’t dishwasher safe. This means you’ll have to spend some time washing the machine by hand to keep it running in top condition.

How Does It Compare?

As you’ve learned in our Technivorm Moccamaster KBT 741 review, this machine is indeed an industry leader. That said, some other models may still be a better fit for your needs or budget. 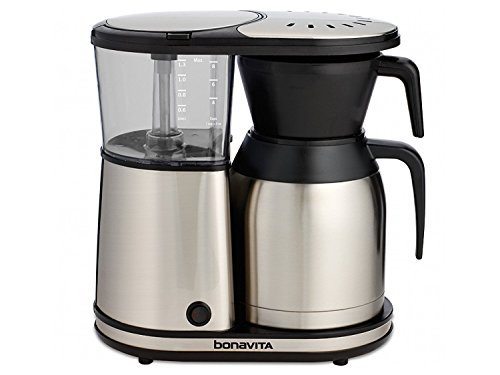 The Bonavita Connoisseur may lack the beautiful, intuitive design of the Technivorm, but it does deliver where it matters most, which is in your cup. The Connoisseur brews coffee that rivals the Moccamaster, and it’s about half the price of the KBT 741.

If you’re a coffee aficionado who is willing to sacrifice the look and intuitive design that the Moccamaster brings to the table to save some money, the Connoisseur may be an excellent choice for you. 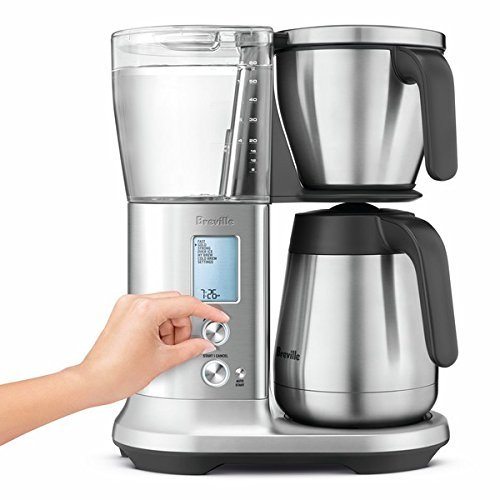 This model features all stainless-steel construction, which creates a bold look in any kitchen. It also offers total control over virtually every aspect of the brewing process.

In addition to being able to control the temperature, brew speed, and pre-immersion settings, there are also several add-ons available for the Precision Brewer. Not only can you make excellent drip coffee, but you’ll also be able to make cold brew, or even pour over coffee if you purchase an additional attachment.

While the look of the Moccamaster is still superior to this machine in our opinion, the Precision Brewer is undoubtedly a solid option for those who like to obsess over every aspect of their coffee and may be a model worth considering.

Finally, we arrive at the Bunn Velocity Brew BT. This model is on the more affordable side as far as performance minded drip coffee makers go, but that doesn’t mean it’s cheap. However, it’s still considerably less expensive than the Moccamaster or the Precision Brew from Breville.

While this brewer produced coffee that was arguably as delicious as the higher priced models, you sacrifice a lot with regards to design. To be frank, we think this coffee maker machine leaves a lot to be desired on the ‘aesthetic’ side of things. It’s around the same size as the Moccamaster, however, it’s bulky design makes it look even larger than it is.

One noticeable difference about the Velocity Brew BT compared to other coffee makers in its class is speed. The name Velocity Brew is certainly fitting considering that it brews a ten-cup pot of coffee in under four minutes, which is considerably faster than any of the other models we’ve discussed. Despite the quick brewing time, the coffee it produces is still complex, velvety and delicious.

Again, what it lacks in a sleek and modern design, it makes up for when it comes to brew quality, which makes this machine a smart choice for anyone looking for a performance coffee maker at a more affordable price point. 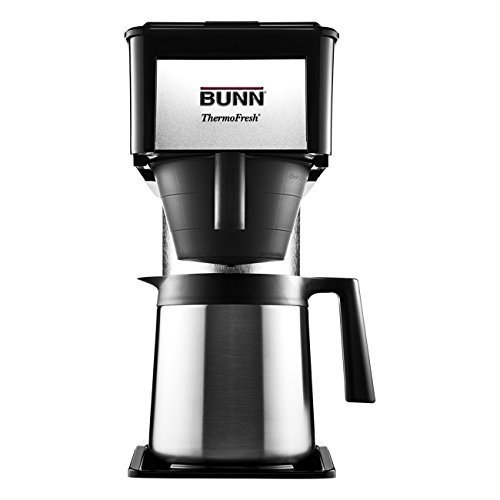 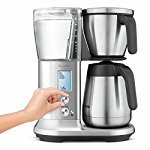 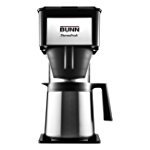