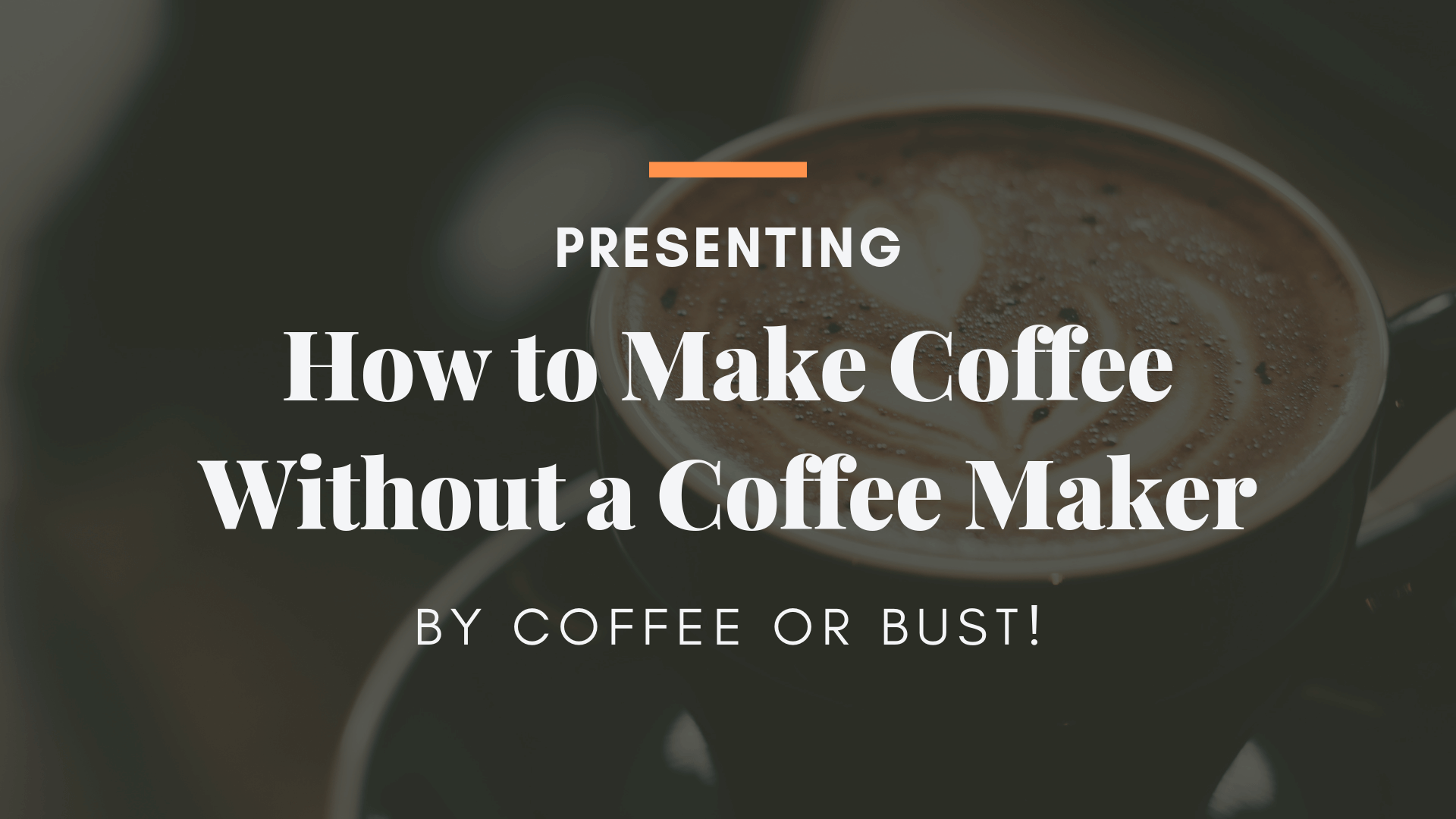 I hear you’re in a bit of a pickle, my fellow coffee connoisseur! Your single-serve machine has crapped out after too many months of ignoring the descaling indicator (we warned you!), your trusty coffee pot brewer has finally kicked the dust after many years of honorable service, your glass french press shattered, or you’ve found yourself in a foreign apartment (for whatever reason, no judgement) owned by someone who for some unfathomable reason doesn’t consume coffee.

If we’re talking that last scenario, never go there again, case closed, but obviously desperate times call for desperate measures. People made coffee long before we had fancy gooseneck kettles, milk frothers, and machines that do literally everything for us, so you can do this!

I mean, my first vote is hop in a car and drive to the nearest establishment selling coffee, but if you’re insistent on MacGyvering this, then let's get to it!

Quick Navigation
Rules of Thumb (Literally)
Method 1: Mock-Pour Over (AKA You Found a Strainer)
Method 2: Like the English Do
Method 3: Faux French Press
Method 4: Cowboy Method
The Caffeinated Conclusion

Back to The Basics

Coffee is made using basic chemistry: extraction. Coffee beans are filled to the brim with delicious compounds, acids, and oils, and we want them. Specifically, we want to drink them.

"Brewing” is just a fancy way of saying we need to create some energy and siphon out the good stuff, which we can do using heat and water.

Well, minor correction, you don’t even need heat. If you have patience, you can throw some grounds in a mason jar with room temperature water and 12 hours later you’ll have a surprisingly decent cuppa joe. 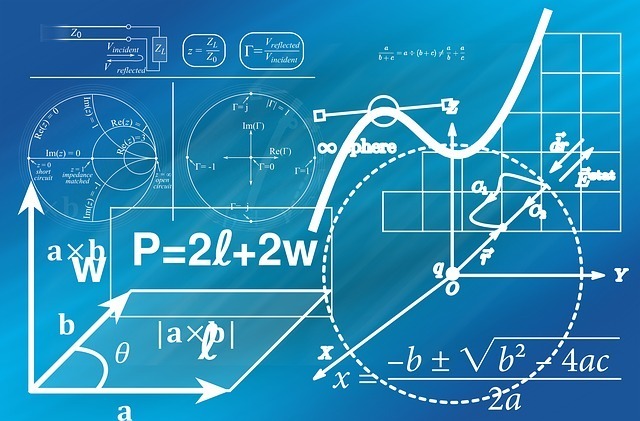 Luckily, we don’t need to know the actual math to figure it out, otherwise we’d be screwed trying to use the equations for surface volume.

Assuming that there wasn’t any foresight here, we’ll tackle the I-need-caffeine-right-now coffee options—assuming that you have grounds, which there’s just no way around.

We’ll start with brewing options that will lead to the most appetizing brew and go all the way down to brewing methods that are a little bit more on the desperate end of things.

No matter what method you choose, you’ll need to remember the basics, and ways to get around them without proper measuring equipment. The same ratios apply, which is between 1-2 tablespoons of coffee grounds per 6 ounces of coffee.

Eyeballing isn’t the easiest thing to do, but you can actually sort out your coffee grounds using your hand without too much fuss.

A pinch (between thumb and forefinger): ⅛ teaspoon
The top joint of your index finger: 1 teaspoon
Entire thumb: 1 tablespoon 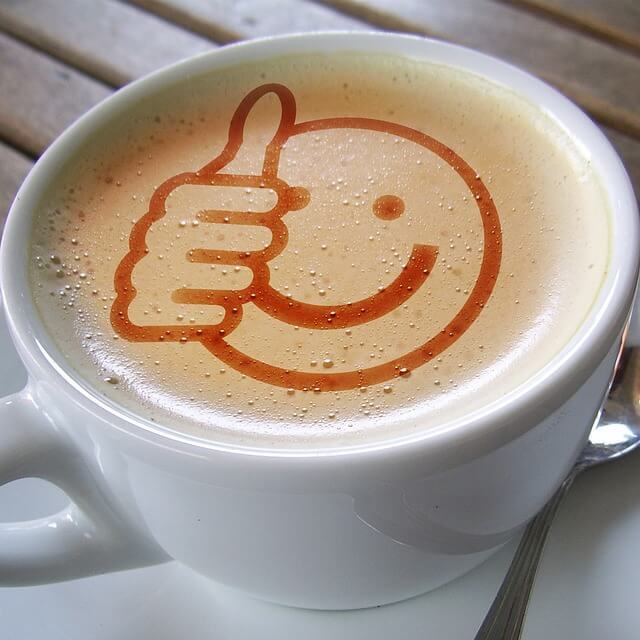 Eyeballing water amounts is a whole different matter. If you can scrounge up something with some demarcations lines, that would be great. A cup of water is roughly the size of a baseball or your fist. Good luck with that one.

While there is some variation when it comes to altitude and temperature, which you can scope out some here, generally, you’ll let water come to a boil and then wait between 1 to 5 minutes for it to reach the ideal temperature, which is between 195 and 205 degrees Fahrenheit.

Method 1: Mock-Pour Over (AKA You Found a Strainer)

Rummage around. If you can scrounge up a thin piece of (non-textured) fabric or you can pilfer the fine mesh filter out of a broken-down pot or single-serve machine, we’re playing a much better game here. One other, albeit less desirable option, would be a cheesecloth, which should be doable if you can fold it over itself at least three times.

Any of these items would mean that it’s quite possible to whip up something relatively similar to a good cup of pour over joe despite machine malfunction or other heinous, unlivable circumstances. 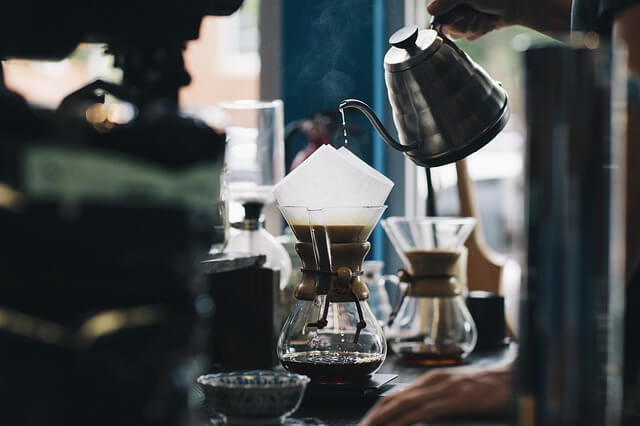 Something like this, but it won’t look this hipster, unfortunately.

The key is to find something that can handle filtering out the medium to finely ground grinds, which is no small ask.

Keep in mind that not just any filter will do unless you’re a fan of a gritty start to the morning. They need to be double layered and tightly woven enough to capture all of the coffee particles. Odds it’s the right filter are best if you can pilfer it from an actual coffee machine, so, if that’s the case, you’re in a pretty solid place.

Heat up your water.

While that’s going on, grab your mug and set the fine mesh filter/thin non-textured linen/coffee filter on top of it.

Measure out your grounds and place them in your makeshift filter. Give it a little shake to spread them out evenly.

When the water has reached the appropriate (non-boiling) temperature, pour it over the grounds as evenly as possible.

ALTERNATIVELY… You Can Use a Sock

That said, the odds of finding a thin sock are much more likely in this day and age, yeah?

I mean, please make sure it’s a clean sock, but it could also eliminate the need for clips, a ponytail, or a rubber band since they’re made to hold on to something cylindrical without assistance. The process is exactly the same as above, just using a sock instead. Again, I want to stress that this needs to be a clean sock.

Socks designed for women are more likely to be at the level of thinness required— think ankle or dress socks, or the type designed to wear with flats would be ideal. 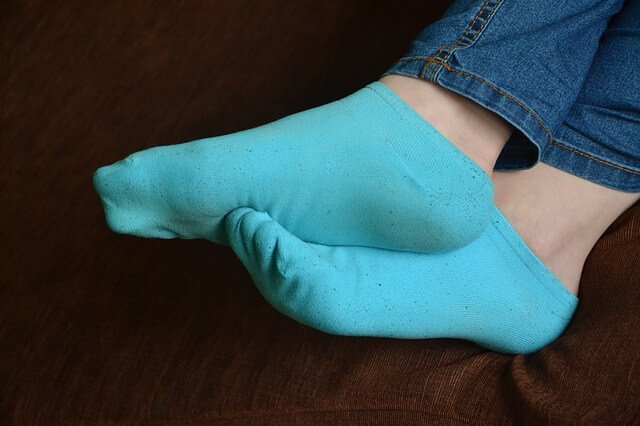 These should work fine. Come to think of it, how do you think tights would fair? I haven’t personally tried it but the more I think about it…

If you’ve procured a coffee filter but aren’t confident you can evenly pour the water, then this may be the way to go. Rather than needing anything with a spout (which would certainly help for Method 1) you don’t need anything that precise— a rubber band, piece of string, or ponytail will do!

Measure up your grounds and load them into the coffee filter, tightly scrunching the top of the filter together and securely tying with your chosen item.

Once the water’s boiling, remove it from the heat and let it cool for 1 to 5 minutes depending on your preference or the altitude of your location.

Put your faux tea bag in your mug and dump the water in. Give it 4 to 5 minutes to steep before removing, either by giving a good yank on the string or scooping it out with a spoon.

Discard the filter and grounds. Drink!

French press coffee is delicious, ranking right up there with pour over. If it’s your preferred method for coffee brewing but your glass press shattered, you can find a new favorite model here, but, in the meantime, this simile will make it feel less like the worst morning ever.

Put the desired amount of water into your saucepan or pot and light that baby up.

Figure out your desired amount of coffee grinds and put them all in one of the mason jars. 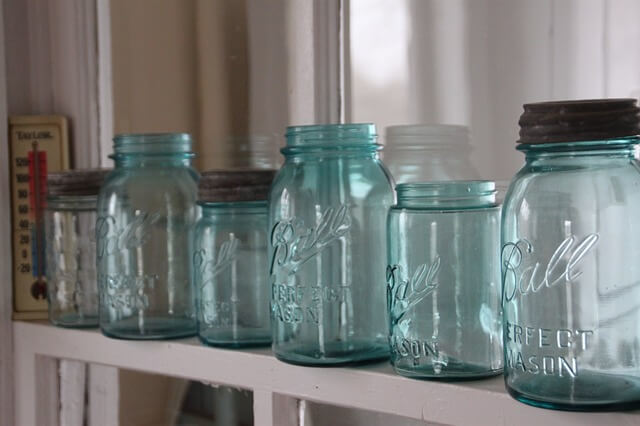 Let’s take a moment to appreciate the versatility of a mason jar.

Once your water is boiling, remove it from the heat and let it rest for about 3 minutes to get closer to the ideal temperature for coffee brewing, between 195 and 205 degrees Fahrenheit.

Pour a little bit of the water onto the grounds, just enough to wet them. Wait 30 seconds while they bloom.

Dump the rest of the water in the same container as your grounds.

Set a timer for 4 minutes. If you’re using medium grind instead of coarsely ground coffee, set your time for 3 minutes to reduce the odds of over-extraction.

If you have a filter, attach it to the second mug using a rubber band, ponytail, or clips. Make sure to create a pocket over the center of the mug— space for the used coffee grounds to go. Don’t forget to also leave at least 1.5 to 2 inches of whatever filter you’re using over the edge of the mug.

If you’re using a filter, simply pour the hot water and grounds through the filter and you’ll be golden. If you’re doing this sans-filter, it’ll take a bit more caution. Slowly pour the beautifully caffeinated liquid into the second mug, leaving the final third in the original—no gritty coffee today!

Before you even begin on this method, you need a hand-rolled cigarette, a ten gallon hat, and a large belt buckle. (Okay, maybe not. But it won’t hurt!) 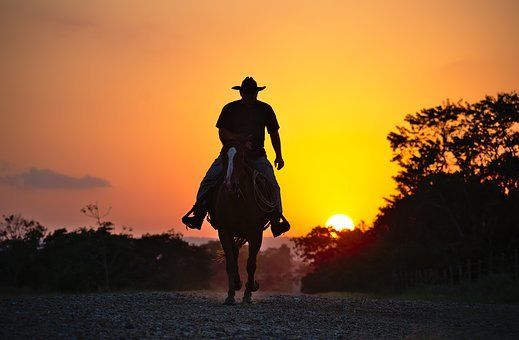 The thing is, the previous methods come closer to a standard cup of brew these days, whereas the cowboy method offers something much more… Neanderthalic. Before we resort to this, are you sure you can’t find a scrap of linen? A paper filter? A piece of paper towel?

Put your desired amount of water in the pan and heat it to a boil.

Once the water is at a roiling boil once again, immediately remove from the heat.

Let it steep for approximately five minutes before consuming. I’d recommend using a ladle, but you can also pour it into the mugs if you’re careful. If you’re having a nasty time with grounds getting into your mugs, sprinkle a bit of cold water into the pan and give things a second to settle before trying again. Hopefully you should be able to successful get a mug or two sans sludge.

When it comes down to it, as long as you have some pre-ground coffee on hand, it’s entirely possible to get your daily caffeine, it just likely won’t be at the same caliber you expect or are used to. Some of these methods come pretty darn close, though, like the pour over options, which will likely yield a decent bounty.

For future coffee maker malfunctions, I recommend having handy, non-mechanical, non-glass options in stock, like the GSI Outdoors Ultralight Java Drip. While not the most modern or aesthetically pleasing items on the market, you can stash this puppy away with confidence knowing that it won’t ever break down or go bad. Maybe gather some dust (fingers crossed), but it’s always good for caffeine emergencies.

Best of luck getting caffeinated, my fellow connoisseur! 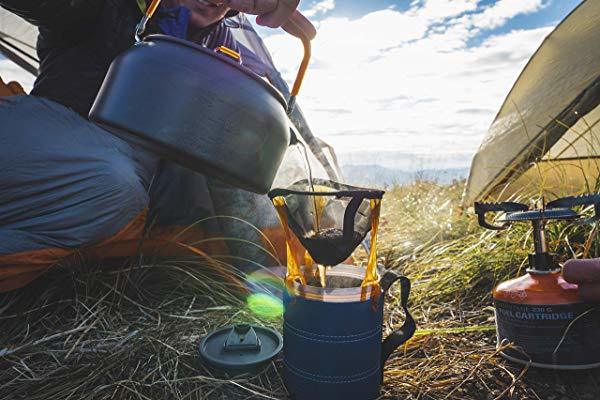 CHECK ALL OF OUR GUIDES HERE!

About the Author Rachel Bean

How to Grind Coffee Beans Without a Grinder

How Much Caffeine is in a Cup of Coffee?