There’s something to be said for old world charm. If you’re missing some antiquity in your life, or are just living in a small apartment, the Moka Pot Method for making a delicious shot of espresso is exactly what you need.

There was an error in that sentence, though. Can you guess what it was? Technically Moka Pots don’t make espresso shots. To do that, you’d need at least 9 bars of pressure. Take a stab at how many bars a Moka pot achieves.

One to 1.5, you totally called it. So, while the caffeine that’s produced is rich, dark, and complex, it’s not actually espresso. It is however, the next best thing to dropping some serious dough on an espresso machine.

For the sake of this brewing tutorial, let’s call the Moka Pot method concentrated coffee. That’s what it technically is.

Quick Navigation
The History
Be Part of the Legend
Moka Pot
Coffee Kettle
Whole Beans and a Conical Burr Grinder
To the Action!
Troubleshooting
In Conclusion 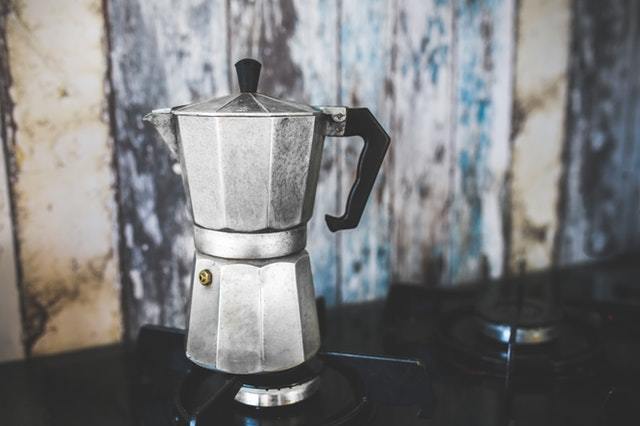 It may just look like some octagonal pot you place on a stove, but Moka Pots are a lot more than that. They play a significant role in history and, in fact, kick-started the modernist aluminum presence in kitchens and catalyzed the creation of the AeroPress.

The Moka Pot was created in 1933 by metalworker Luigi di Ponti in, you guessed it, that boot-shaped country we all know as the creator of most things coffee: Italy. Bialetti, coffee production giant, quickly took to producing the Moka Pot and here we are today, with this deceptively elegant piece of machinery that yields concentrated coffee.

It may seem like a simple story, but it represents far more than that. There’s a legend that says the Moka Pot was created based on a clothes-machine from yesteryear, and it’s fit to stand on two legs. Soapy water was heated to rush up a tube that was aimed at dirty laundry. Replace “soapy water” with “filtered water” and “laundry” with “coffee grounds” and you have a pretty good approximation of how a Moka Pot works.

More than this, though, the Moka Pot was revolutionary at the time. See, espresso shots were only available in cafes—they were completely monopolized. The general public had no way to make them in their own homes, forcing them to seek these delicious caffeinated ounces outside of their own kitchens.

I’ve already stated that Moka Pots do not make espresso shots, but they made the closest approximation and people latched onto them hungrily. Their affordability actually coincided quite nicely with the 1930s economic downturn, allowing people to continue enjoying concentrated coffee despite empty pockets.

And there you go. You can see Moka Pots in museums, or you can snatch up one these artifacts using 2-day shipping and display it on your very own stovetop!

Be Part of the Legend

Okay—you know the history. Let’s get down to how the how-it-works portion of this story. You’ll need a few things, first.

Got it all? Even that last one? Alright. Let’s divide up the parts of the Moka Pot so you know what I’m talking about first.

They typically have three components—the base, the drop-in filter, and the top container, where the drinkable coffee winds up once all is said and done.

Okay, so, here’s the thing with water. Water takes time to heat up. If you put cold water in the Moka Pot and let it heat up with the grinds and everything screwed on with it, you can end up with an extremely bitter, burnt-tasting brew. It’s how they used to do it in the days when our grandparents had to walk 10 miles to school uphill both ways in snowmageddon and tropical storms.

None of that makes sense, and neither does sticking with the old way just because it’s the old way. The best way to make coffee that won’t taste like burnt rubber in a Moka Pot is to pre-heat the water. Put what you need in the kettle, let it hit that sweet spot at 200 degrees Fahrenheit and then put it in your Moka Pot.

Problem solving. That’s what today’s generation is about.

I know I just told you to shove the old way out in the trash bin along with all of the other bologna, but I’m about to eat that garbage. I’ll do it in the name of good coffee, though!

Pre-ground beans stale. That’s all it comes down to. You can argue about “ease” and whatever the hell else you want to prattle on about, but, the fact of the matter is this: I’m right. Not only do pre-ground beans lost their flavor and become flat rapidly, they also take all control out of your hands. When using a Moka Pot, that’s kind of a no-bueno moment.

See, Moka Pots are fussy in some ways. If the beans are too coarse, you’ll end up with a geyser of steaming, caffeinated demon liquid soaking your stainless steel kitchen. If it’s too fine, you could end up with a pressurized time bomb that could go off at any given moment.

I asked you if you had the last thing on my list, okay? Don’t complain. I said that you need some patience. If you forgot it at the grocery store, that’s not my fault.

And finally, when it comes to the grinder, conical burr coffee grinders are the way to go. If possible, we recommend avoiding blade grinders altogether. Blade grinders generate heat and produce an uneven grind, whereas burr grinder produce an even, consistent grind. When you have a consistent grind, you'll be able extract a much higher quality flavor from your coffee beans.

We’ll take this bit by bit so you can replicate it at home with (hopefully) few coffee geysers to speak of.

Let’s get some water into that kettle and heat it up. I’m a fan of concise, multi-use time, so, while that’s getting nice and heated, we’ll move on to step two.

Grind the beans. What kind of beans? Good question. You have a number of options, but use one that you already like to start out with. If you’re really jonesing to try something new, I made this handy-dandy list for you quite recently. Check it out here.

Because we’re not really aiming to set off Mount Caffeination in your kitchen, start with a medium grind. It’s least likely to cause problems. You can tweak it based on your findings for the next few rounds.

When the water hits 200 degrees Fahrenheit, pour it into the base of the Moka Pot. You can double check the temperature with a thermometer if you’re not sure before committing to the pour. Now, remember, do not overfill the Moka Pot base. The valve needs to do its job. Fill to underneath the valve. Have I said it enough times yet?

Drop in the coffee filter and fill it up. There’s really not a tablespoonage I can give you here—literally just fill ‘er up. Don’t tamp it down or you could run the risk of water not being able to rush through. Just level it off and leave it be.

Screw on the top container firmly, remembering that metal gets hot. Once you’ve done that, it’s time to turn up the heat! Literally. Get that medium-high heat a crackin’. Leave the lid open and watch intently. Just, ya know, maybe from a few feet back.

If all has gone well and you’re not screaming in agony from coffee-geyser burns, you’ll see coffee begin to drip out of the spout. Once this happen, close up that lid nice and quick and let it go about its business.

Here’s where you have to use your senses. You have to keep an eye on this coffee method, and by “eye” I mean “ear.” What you’re listening for is a distinctive gurgle. Once it’s begun, you need to shift this pot off of the heat pronto.

Once the gurgling is all done, it’s time to enjoy! Pour yourself a cup of concentrated coffee and sip to your heart’s content!

Me: Ah, yes, well. Your grinds were definitely too coarse. Next time, ya know, if there is a next time, you may want to go a notch or two down on that burr grinder, yeah? And maybe stand back? Next!

You: Listen, I’ve been staring at this thing with the lid off for eons and nothing’s happening. No coffee. No nothing.

Me: Is the stove on?

Me: How long are we considering an “eon” in this dramatic scenario?

Me: Mayday! Mayday! Abort mission! Dive in there and shut that heat off ASAP!

Me: Your grinds were too fine and there’s pressure building in there. It’s best to let it take it’s sweet time de-pressurizing before making another attempt.

You: It’s burnt to hell. This is Satan’s piss.

Me: Quite an explicit picture there, but I’m going to make a guess that you didn’t heat the water up before putting it in the Moka Pot so you figuratively smoked your coffee to the fiery underworld.

Me: Your grandad thinks it’s possible to walk uphill both ways to school and home. Just heat up the friggin’ water before putting it in the Moka Pot.

Moka Pots are classic, and hell if they don’t make you look like you know something. They’re great for a unique, thick brew with intense flavor that’s just not quite espresso, but a highly concentrated coffee drink that’ll have you up and at ‘em in a jiffy.

Plus, they kind of add some excitement to the morning, right? Give it a go and feel the Italian history coursing through your veins! Ah, I love the taste of a destabilized espresso monopoly in the morning.

About the Author Rachel Bean

How to Grind Coffee Beans Without a Grinder

How Much Caffeine is in a Cup of Coffee?